Alice was introduced to us 155 years ago by English writer Lewis Carroll. His work is masterful at expressing language to make fiction sound like reality. Still, its story of a little girl following a rabbit into a strange land continues to endear generations. Inspiring countless movies (most notably the 1951 animated Disney film), we resume falling in love with its peculiar characters and unpredictable plot. However, perhaps, what may contribute to its lasting appeal could be the delightful and insightful things that Carroll and his characters say.

The Most Timeless ‘Wonderland’ Quotes

“Why, sometimes I’ve believed as many as six impossible things before breakfast.”

This quote is often mistaken for Alice as the one who says it when it was instead, the Red Queen. As for the quote itself, the general idea is that one can only do impossible things if they believe in impossible things. Here, Alice does not understand the existence or importance of the imagination. All this to say, the Red Queen is attempting to get Alice to acknowledge that the imagination is a powerful thing. The same power she needs to challenge, and defeat, the Jabberwocky. It is an idea that parallels the theme of absurdity rooted in the story.

Said by the Cheshire Cat to Alice in one of the most concise descriptions of the strange world down the rabbit hole, it does not necessarily mean a bad thing. What we can take from this line is, possibly, to embrace our more quirky, unpredictable side and feel free to let it out sometimes.

“It’s no use going back to yesterday, because I was a different person then.”

A quote with the perfect illustration of how many of Carroll’s characters are excellent at making remarks that hold greater meaning. Under all the madness and peculiarities depicted in Wonderland, an underlying element is Alice experiencing an identity crisis from growing big and back down. However, the literal conversation she has with the caterpillar lends itself to self-reflection about less physical types of changes. Like that, each day, we grow as individuals, and so, are defined by our choices, perspectives, and experiences. We then wake up every day as a new person, with new thoughts and ideas.

Certainly, a cheeky thing to say; it shows why we have come to love the Mad Hatter but also never want to meet him. Yes, we should refrain from talking if we are not thinking. Still, the Mad Hatter is not the one to talk.

Here we have another quote that transcends its place in the story. After so much change Alice has undergone, and in so little time, she does not recognize who she is anymore. Nevertheless, Alice considers her identity crisis a fun challenge rather than brood about it by referring to it as a “great puzzle” to figure out.

“It takes all the running you can do, to keep in the same place. If you want to get somewhere else, you must run at least twice as fast as that!”

Ever hear of the glass half-empty, glass half-full scenario? Well, the advice in this quote presents just that. It refers to either cause for an existential crisis that must work hard without making any real progress, or its motivation to be the one that gets somewhere. It can also be put as the idea of running fast and staying in the same place—as a great metaphor for life. How much time do we invest, only to maintain things? How much energy do we dedicate to going beyond the status quo? Not a masked critique, but an honest question. Moreover, there may be truth to how we spend most of our time in how the Red Queen puts it, as each day is spent running just to stay in the same place. 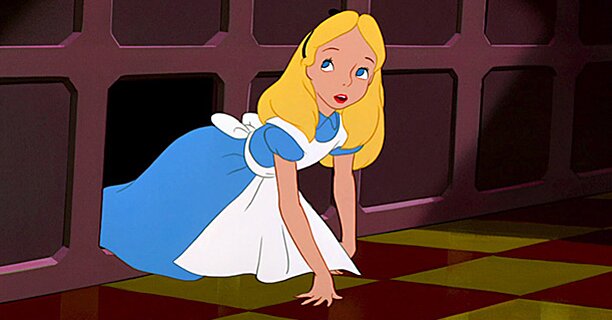 So surprised by the strange circumstances, Alice found herself making up a new word in her “Curiouser and curiouser” phrase. As in the Oxford English Dictionary, the expression is still used to mean that something is getting increasingly confounding.

“And what is the use of a book,’ thought Alice, ‘without pictures or conversation?”

It could be argued that illustrations are a response to the words of a text, thus, making them essential elements of a story. On the contrary, it could be in the end they are themselves a “reader response” and not to be conflated with the text. Furthermore, allowing the reader to create their own “imaginative world,” taking or leaving the illustrations. Then, who could imagine a book being of any use other than sparking conversation? Whether it be with yourself or others.

“Alice in Wonderland” continues to be a story that invokes both amusement and contemplation in fans of all ages.