The Boys Season 2 Finale Part I: The Brilliant Grayness of 'Homelander' & His Achilles Heel

Part I: The Boys Season 2

We all love The Boys and want more content like it and are excited about another season. Still, season two had some truly electrifyingly brilliant moments, a sophisticated story, and some obvious minor missteps, revolving most around Homelander and Butcher that will be discussed. Starting with our favorite supervillain, Homelander, who once again had one of the most fascinating arcs this season.

Being that Homelander is the one character dominantly involved in the show’s edgiest scenes, it would have been great to see The Boys engaging in the diabolical much more, too. Nevertheless, most of his shocking/sex scenes were fun and did work, while some appeared done only for shock value. It felt like the Homelander we got in season two was more like his comic book persona and not what the show developed him as.

Some scenes came across a tad off since the show worked hard to give him a very nuanced humanized arc, slightly opposite from comic book Homelander in the first season. The creators were smart to make him and the show far more sophisticated and broader in scope as comic book Homelander to a T is damn near impossible to pull off for more than one season. Yes, the crassness is a good foundation from the comics (and what made them stand-out), but it’s excellent that the creators take it beyond that to showcase the talented cast.

For instance, in the comics, Homelander leads the sexual assault of Starlight along with Black Noir, The Deep, and A-Train, which we know in the show that story line was given only to The Deep. Plus, he does not suffer the typical vices other members of the group do, such as drugs or promiscuity, and instead, is solely concerned with the success of The Seven. What transpired from this is it gave Homelander room to be more than a misogynistic psychopath motivated by power and violence.

Rather, Kripke conveyed his rage and malevolence best described as “still waters run deep.” His Captain America like remarks and placid Superman exterior came together to create his superhero persona, masking the unhinged darkness lingering within. Although in season two, some moments seemed to forget the nuance of Homelander, that was brilliantly established in the first season. Besides that, small fault, what the show did new, exceptionally well, and unexpectedly the second time around with Homelander, is deliver a depraved, but loving father and shed new light on his Achilles Heel. And what may be integral to giving us our best version of Homelander come season three. 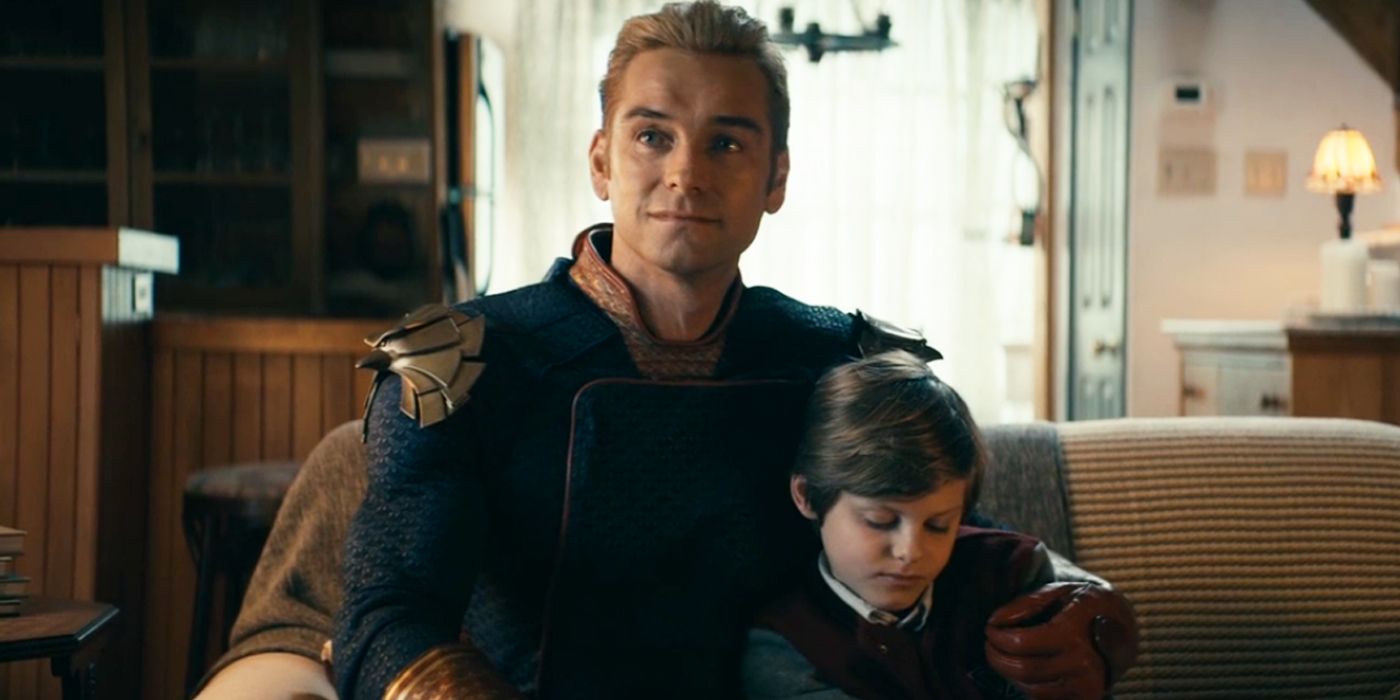 During the Ryan, Becca, and Homelander scenes, we witnessed a considerate side of the dangerous superhero and learned his motivations for wanting to be a father. Season one expressed the repressed hatred Homelander felt for the people who raised him as a lab rat, and its horrible psychological effects decided validly, he does not want that for Ryan. As a result, the talented Antony Starr delivered his lines with genuine concern and care, contributing to his character’s nuance so richly experienced in season one.

There are moments of Homelander and his son that will stir vastly conflicting thoughts and make us forget, even if its only for a second, this man is a murderer and let dozens of people die on a plane. That is compelling writing. Convincingly projecting these emotions in a tricky character like Homelander—its such a balancing act—hands down is one of Kripke’s greatest accomplishments with the show thus far. Operating at this level of a portrayal will be remembered whether we like it or not. Powerhouse, daring, and damn diabolical, it is fascinating to see the world’s complex shades depicted in Homelander.

Still, Homelander’s fatherly bonding does not end well, and for the first time, we truly feel he is powerless, and the mighty have fallen. But this defeated villain does not feel like the typical victory, as is nothing in The Boys. Always entertainingly subverting our expectations, Homelander making the decision to let Butcher take his son because Queen Maeve (Dominique McElligott) threatens to release the airplane tape—which means he will never be loved by anyone again—was surprisingly somber. Moreover, it informed us of Homelander’s Achilles Heel that he wants to connect with someone so desperately.

On the other hand, we probably should not oversimplify the decision he made. Influenced by the Homelander chants in his mind, we are made to think he is an egomaniac. It definitely was an element in play, but indeed not the whole story. Homelander has become not the clear-cut villain we are used to seeing, but someone who has done despicable things yet has hints of potential to be good in him. We have to consider his identity, fans, and how his life has been built around an image.

And how it still takes tremendous strength for anybody to make such a decision. Queen Maeve not only threatened his celebrity but threatened his ability to exist in the world. That is extremely powerful and speaks to the complexity of The Boys. Stuff like this can be easily missed since the season went a little too fast this time around in terms of jumping from different plots, but the sophistication is undoubtedly there. Overall, after witnessing Homelander’s set-back in this season and that raging stare in the press-conference scene, Kripke’s promise that he’ll turn into a homicidal maniac is firmly declared.