Much like expressed in my The Batman trailer article, Matt Reeves’ iteration of the character looks assuring, and with the new set photos released, that opinion stands stronger. This time around, other pivotal characters are introduced, and Batman (Robert Pattinson), along with Catwoman (Zoe Kravitz), is in a new setting, outfit, and accompanied by Gotham’s families. The Cobblepotts, Wayne’s, and Falcone’s. It is also great to see that Matt Reeves is doing the characters justice even with his changes, that when we instantly gaze at them, we know exactly whom we are looking at.

Reeves has found a way to include new elements without changing the story, which is a brilliant and essential but difficult thing to get right. It really looks just as good as what we want it to be regardless of the changes, and best of all, The Batman looks to be the most actually like the comic book brought to life. Therefore, as with the Marvel and DC films adapted, we have experienced these stories dragged into the real world like Christopher Nolan’s trilogy did exceptionally, or have had many things admirably inspired, but nothing like where The Batman may be heading.

Seeing as the photos and rumors have implied, the comic book material Reeves is set to bring to the forefront shows how savvy he is to identify such iconic and strong Batman canon. Thus, he has chosen to use material from Batman: The Long Halloween, Dark Victory, and Batman: Year One. But before we jump into the comics and why they work so well for Reeves’ vision, we will break down the telling new set photos with a particular focus on Zoe Kravit’s Catwoman. We see Catwoman close to Carmine Falcone (John Turturro), a mobster in Gotham from the new set photos. In both The Long Halloween and Year One, Selena Kyle has her run-ins with Carmine Falcone, wherein Year One; she famously leaves her mark on his face. If we look closer at the photo, the actor playing Falcone has the scratches on his face, which appear like an old wound, making it even more fascinating that he is seen here hanging out with Selena. In this regard, it brings the question if Falcone knows if she is Catwoman or not. Though her closeness to him suggests Reeves may be going with the comic book version where Selena is Falcone’s illegitimate daughter, he does not acknowledge publicly, which fuels her particular vendetta against him.

Then, a styled shoulder-length lob (most likely a wig for all of Selena’s disguises) and patrician posture to go with that noteworthy cat-like hand modeling and razor-sharp manicured nails is flawless. And those nails made to look more like claws are just incredible detail for her character. Lastly, with this look, Reeves could go for the Femme Fatale, various wigs, and high end looks approach. It speaks so true to Selina. One who struggles with self-identity, a woman of mystery, finding her place in society could be a fantastic contrast to Michelle Pfeiffer’s Catwoman. 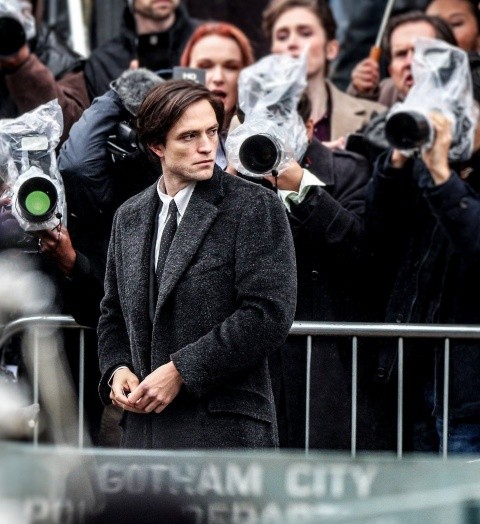 Batman appears similar to what we saw in the first trailer; however, these shots give us more proof of Pattinson’s striking charisma, as seen in the skillful frame with the paparazzi leaving the Mayors funeral. As for Oswald Cobblepot (Colin Farrell), aka Penguin, he looks very identifiable here, played by the unidentifiable Colin Ferrell in impeccable prosthetics (I feel an Oscar in makeup coming). Most likely playing another mob boss as Falcone, Penguin is perfectly dressed in a cheap suit in need of more buttons and sweat stains to match. Lastly, shots of accurate filthy Gotham city are shown with a Gotham bus showing a stop labeled as Park Row—where the infamous crime alley is and where the Wayne’s were murdered, which was a highly affluent part of the town gone bad.

So, the comic-book Reeves is mainly and most heavily influenced by for his film were Batman: The Long Halloween, created by Jeph Loeb in 1996. And crazy enough, Loeb also happens to have been Reeves’ screenwriting professor at USC. Nonetheless, heavily influenced by film noir and is even a homage to The Godfather—the comics have the same opening as the Coppola film—The Long Halloween continues the story of Carmine Falcone introduced in Frank Miller’s Batman: Year One. In fact, the new shots express filmmaking rigor reminiscent of Francis Ford Coppola’s. Furthermore, if we think about it, Bruce Wayne in these photos shares the intensity and meticulous calculations of Al Pacino‘s Michael Corleone as they both have evidence of an origin story.

With parallels like this, we should keep an eye out for similar story beats from the classic mobster film such as the assassination attempt and revenge that is very plausible for a Batman comic. Nevertheless, remembering the teaser trailer where we had the David Fincher’s Seven vibe also fits into The Long Halloween. It epitomizes what Gotham could become (as The Long Halloween is partially about the mobs diminishing control over Gotham to the “Freaks”).

At the same time, The Godfather would represent what is was before. It would be a genius set-up. Then, set early in the caped crusader’s career and a few months after the Year One events, the story centers around the gradual transition of Batman’s tryst with mob-goons to full-fledged supervillains. Excitedly, it is also the origin story of Two-Face. Now we have a total of four known iconic Batman villains coming to the big screen.

Also written by Jeph Loeb, Dark Victory is the sequel to Batman: The Long Halloween, published from 1999-2000 by DC Comics. The plot centers on a series of murders involving Gotham City police officers by a mysterious serial killer known as The Hangman. While this killer terrorizes Gotham’s streets, also central to the storyline is a territory war between Two-face and the remnants of the Falcone mob led by Sofia Falcone. The Falcone family is assumed to have a critical role in The Batman as we see Carmine Calpone pictured next to Catwoman in the new set photos.

Then, written by Frank Miller in 1987, Year One is one of the first examples of the “limited series within a series” format. Pretty evident from the title, this comic recounts the beginning of Bruce Wayne’s career as Batman and James Gordon’s with the Gotham City Police Department. At this point, Bruce is 25 and is returning home from training abroad in martial arts, manhunting, and science for nearly twelve years. What we can guess Reeves saw in this comic was not only a great foundation to Batman’s early years but insight into capturing the atmosphere of Gotham. This Being that it follows Gordan’s first night patrolling, revealing Gotham’s law enforcement’s disturbing nature and allowing us to experience the city with these characters anew. Their feelings and outlook are being founded, which could suggest some excellent character development to come. Overall, all three are amazing comics to reference that wisely position Matt Reeves and the cast in a great spot.

What do you like or dislike about the new set photos?

The Mummy (1999): An Adventure Movie Classic