'On My Block' In-depth Character Analysis of Monse & Cesar

In only three seasons, On My Block (2018) has successfully weaved many sophisticated stories told through compelling character arcs. The primary and even key supporting cast members are developed with fearlessness and respect. By the series recent season 3 finale, audiences were left with a bittersweet conclusion of TV’s most underrated friendship. Monse (Sierra Capri), Cesar (Diego Tinoco), Jamal (Brett Gray), and Ruby (Jason Genao), are a group of people that the world of storytelling needs more of and told in the way the show’s creators, Eddie Gonzalez, Jeremy Haft, and Lauren Iungerch have done.

Ergo, based on a group of four teenagers living in the gritty inner city of South Central Los Angeles beginning high school, the group deals with the dangers of the hood, romance, friendship, and family. Hence, the creators decided to approach this familiar premise in an unfamiliar way, garnering great appreciation for their authentically textured and bold take on the fictional, yet relatable Freeridge neighborhood. Following their refreshing perspective, the show chooses to take a dark comedic tone to tell its stories.

Doing so, effectively addressing cultural stereotypes and changing how they are handled within a narrative while also portraying a three-dimensional view of the world. It allows us to experience candidly diverse opinions, and cast, that handles tough subjects told through a vibrant lens. The show also prioritizes authentic storytelling over socially political agendas heavily present in pulp culture today, leaving room for On My Block to organically stand out among the rest.

As a consequence, On My Block explores the sub-culture of kids of color, expressing various stereotypes of living in the inner city where gang violence is prominent. We, in turn, through Monse, Cesar, Jamal, Ruby, and a few supporting roles, get insightful stories unique to each character and how they affect one another.

However, no matter where the story turns or whom it involves, violence is a lingering aspect of every season. It is the driving force that influences the people of Freeridge for better or worse. The premise centers around a group of friends that try to stop one member from joining a gang; that alone starts a chain reaction. One that motivates the central character arcs by bringing them together in distinctive ways to undertake stereotypes and subjects of the hood, romance, friendship, and family. 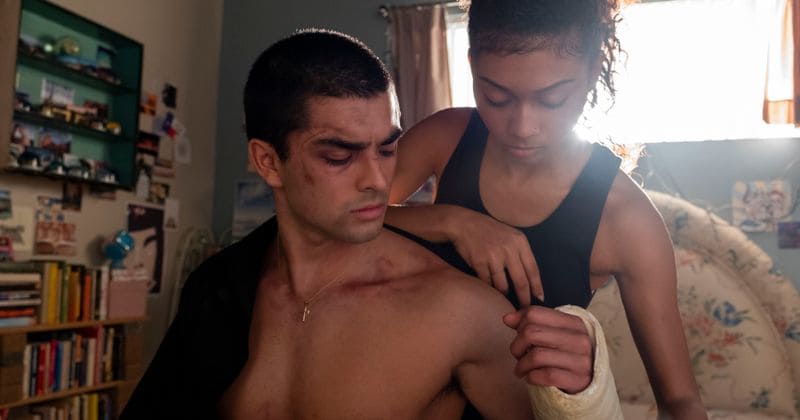 Moreover, within the group of friends, Monse and Cesar gravitate towards one another most. Due to their attraction sexually and their shared understanding of broken family dynamics. These two crucial matters allow the creators to explore female empowerment, tragic love, gang life, and broken families. With Monse, portrayed as the headstrong, bossy girl that is fearlessly loyal to her friends and is of Afro-Latina descent raised by her single father.

Outspoken and selfless, we find her putting the needs of others before her own to save Cesar and keep the group intact. This sentiment extends into the later relationship with her mom, Selena, where she easily forgives (a rare occurrence) being abandoned her whole life and embraces their newfound bond in the beginning. Home alone for extended periods since her father travels for work, Monse, naturally, is shown to be self-reliant, stubborn, and an ‘all or nothing’ not easily forgiving type of person.

Nevertheless, she can get quite sad at times. To this effect, it makes her character even more human, as audacious people usually are the most emotional and passionate deep down. Monse, additionally, is shown countless times denouncing female stereotypes by refusing to change her style to appeal to guys or anyone for that matter or speak her mind when she sees fit. Not worried about the repercussions, which backfires from time to time.

The writers do this all without turning her character into a caricature of current feminism. Monse is continuously in a mode of soul-searching. She deals with the world’s expectations and finding her place within her existence, in a way that feels personal to her character, without a mother in a neighborhood overcome with gang violence. Which she bravely faces by continuing to move forward and take on anything thrown at her with tenacity.

Cesar, on the other hand, is easygoing, intelligent, caring, a natural leader, and known as “the glue of our crew” by Monse. Forced into the gang life by his older brother, Spooky (Oscar), the experiences they have together present a more intricate side of Cesar. We learn that he is a social chameleon, changing from laid-back with his friends, but nervous and even cocky around Oscar. There are scenes where he is prone to becoming unhinged as well. All this to say, among friends, his true nature shines, which goes against the stereotypes of people that join gangs, where he proves to value human life and fears death, has a deep love for Oscar, considerate, and can be quite sensitive.

Still, observing these two characters, we see that both Cesar and Monse deal with similar afflictions that shape their outlook on life and decisions. Brought together through friendship that grew into a romantic relationship, both have a parent that abandoned them, have family involved in gang life, and strong personalities that allow them to get through some harsh realities. However, Cesar does not appear to be affected by his parent’s absence, while Monse is shown to carry memories of her mother in a box within her closet and later shown tremendously hurt that their new connection does not end well. As for gang life, Cesar is forced to participate in the Santos gang, while Monse’s elders were in the rival gang, the prophets. Besides their resemblances, by the end of Season 3, they embark on truly different paths that hit hard with poignancy.

So bringing it to the final scene of Season 3, it elevated On My Block furthermore per its two center roles, for which Monse and Cesar get an ending that is a testament to the shows profound strides in compelling character arcs. Starting as a girl that just wanted to keep her friends together and be with Cesar, Monse ends up leaving Freeridge for years. Looking back at her last intimate conversation with Cesar, we see her resisting to leave, and Monty (her father) telling her, “Don’t waste this opportunity on some gang banger. His life isn’t going anywhere, and yours can”. Interrupting their conversation, Cesar walks in after hearing Monty and says, “Your dad’s right. She needs to go”. Monse then reveals her true fear of going; “If I leave, everyone is gonna stop being friends,” and he will forget about her.

Cesar finally dispels her worries of leaving by saying, “We can never really leave each other. Know why? Because we made each other who we are. We are burned into each other’s DNA. When your heart beats, my heart beats with it.” That bittersweet last conversation in Monse’s room sets up the 2-year time jump where everything has changed. Monse has become the boarding school girl she did not want to be and does not return to Freeridge, and after rejecting the gang life, revealed, is Cesar now the leader of the Santos.

Heartbreaking, but necessary, if the show is fortunate enough to continue, which it most definitely should. Looking at these two stories, the creators have managed to weave in their complicated family woes with realities of living in a gang-ridden neighborhood and first loves to give us a realistic ending to this chapter in Monse and Cesar’s lives. The unfortunate reality is, gang life can and does tear communities apart, and relationships and opportunities for a better life come far and few.

In which we see Monse’s dad knows and does everything in his power to remove her from Freeridge, understanding what staying may entail. Cesar knows this too and helps convince Monse to leave; accepting his experience will be different for which eerily foreshadows a quote from the shows second episode in Season 1. When Cesar responds to the group about saving him from the gang life, he says, “There is no out.” His acceptance sadly became his reality.

What are your thoughts about Monse and Cesar’s journey and where they end up?

Spirited Away: The Real-life Mythology and References Explained

Wonder Woman 1984: Breakdown of The Real Problems Behind the Camera

What Happened to Azula After ‘Avatar: The Last Airbender’ and Zuko’s Mother