GoT 'Battle of The Bastards' Part 1: War & Drama

The Emmy winning episode, Battle of the Bastards, is a technical and thematic achievement in storytelling. Directed by Miguel Sapochnik, he has also directed the Game of Thrones episodes The Bells, Hardhome, and The Long Night. Miguel’s history with the show proves he is a master at creating brilliantly immersive and visceral war sequences. So no wonder Sapochnik won one of the episodes seven Emmy’s for his directing work, work noted for its monumental accomplishment and contribution to dramatic stories within the last decade.

The battle that takes place between Jon (Kit Harington) and Ramsay (Iwan Rheon) is not only entertaining and gripping but also an essential piece of media within the television canon. The narrative devices that unfold during the battle and its technical excellence are to be appreciated and studied. For what the writers, director, and actors were able to create not only show the potential of their work, but what intelligence, creativity, and ambition can attain in visual literacy.

Scenes discussed in Part I: 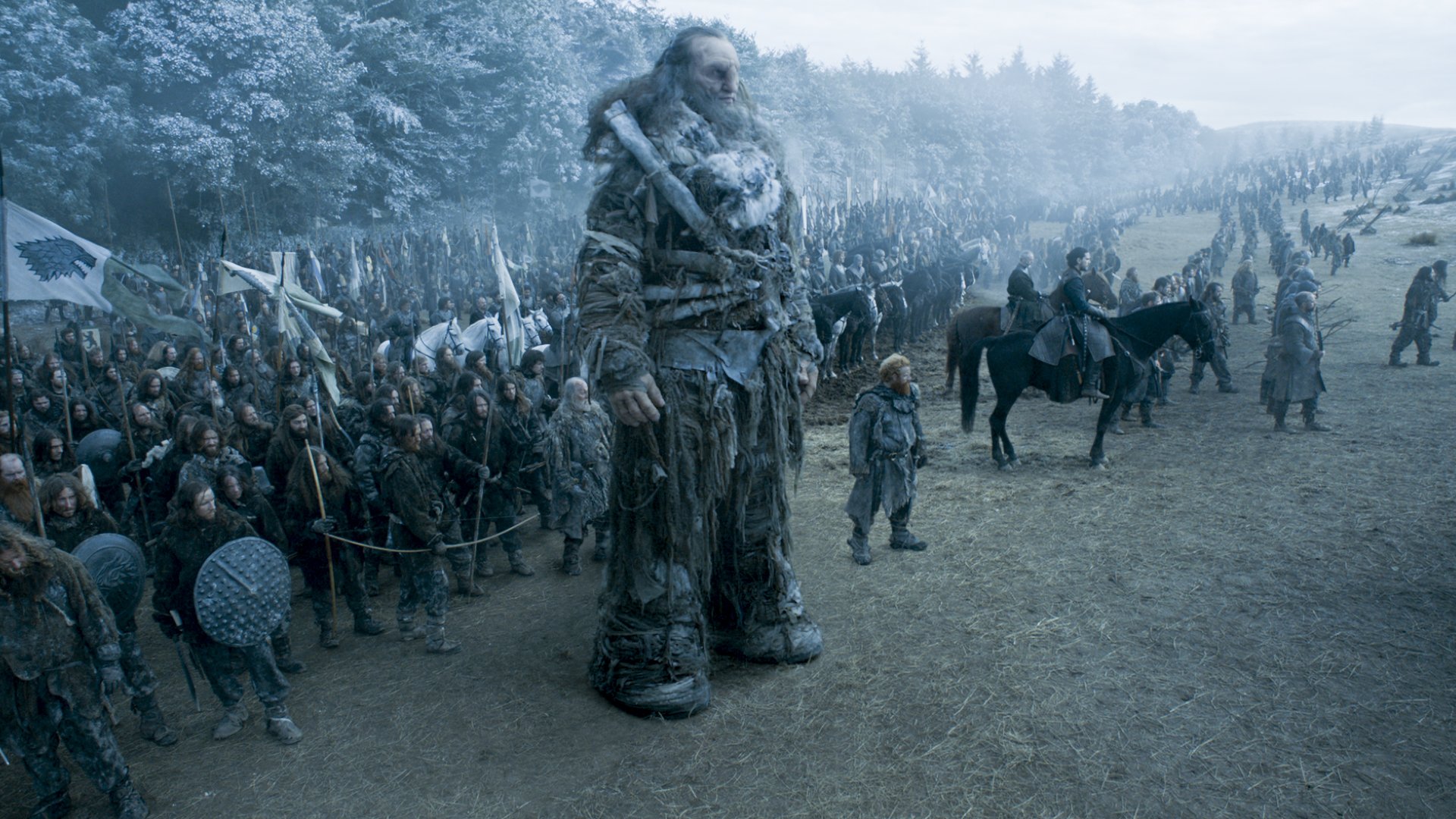 The Battle & What’s to Come

Moreover, filmed in the Northern Ireland valley, the battle itself took 25 days to complete. The crew included horse masters, stuntmen, elaborate camera set-ups, and plenty of stars from the series. Then, 500 extras, 600 crew members, and 70 horses to create the Battle. What resulted was a war spectacle from start to finish and a heart-wrenching death. Looking back at the scene as a whole, what stands out most in this fully fleshed out battle is the direction, editing, writing, and music. And an exceptional performance from Kit Harington as Jon.

From the beginning, presented are two very different leaders, in which the scenes narrative devices unfold most through. Jon is essentially the emotional one that falls for Ramsay’s strategic and cunning game. He truly (and impulsively) believes he can save Rickon (Art Parkinson), and Ramsay uses that to the advantage. Ramsay assumes Jon’s good nature and utilizes it as a weakness. On that account, the direction, editing, and music utilized during this first interaction heighten the drama and intrigue. Unlike the music heard later in the combat, the beginning starts with Ramsay’s themed malevolent and eerie fragmented score. It sets the tone and suggests that its Ramsey’s playing field, and will be no ordinary fight. From here, the direction brilliantly orchestrated by Miguel Sapochnik along with the music helped to convey further the character’s narratives and the events to take place. So beginning with an aerial shot of the two armies, the camera then tracks the men as they stand silently with piercing focus. The aerial shot allows us to see that the fight is happening in the courtyard instead of the battlefield. This choice of location made the war more effective and momentous since it draws to the Stark’s ties to Winterfell and wanting to take it back. Pretty much, it makes the scene more intimate, as it should be. The aerial shot is then cut to various close-ups and rack focus of one soldier to another. In this fashion, presented is an intimate point of view into the war’s atmosphere.

Where the momentum picks up in song and camera movement once it tracks up from behind Jon to reveal Ramsay’s army and three flayed, burning bodies positioned upside down. During this scene, the music swells, and the dead bodies match Bolton’s infamous flag. While Jon feels the scale and magnitude of Ramsay’s army, what follows is a series of cuts to Ramsay and Rickon’s entrance and Jon’s telling reaction to it. From here on, the cuts and camera movement help to establish Jon and Ramsay’s narratives and their idiosyncrasies. 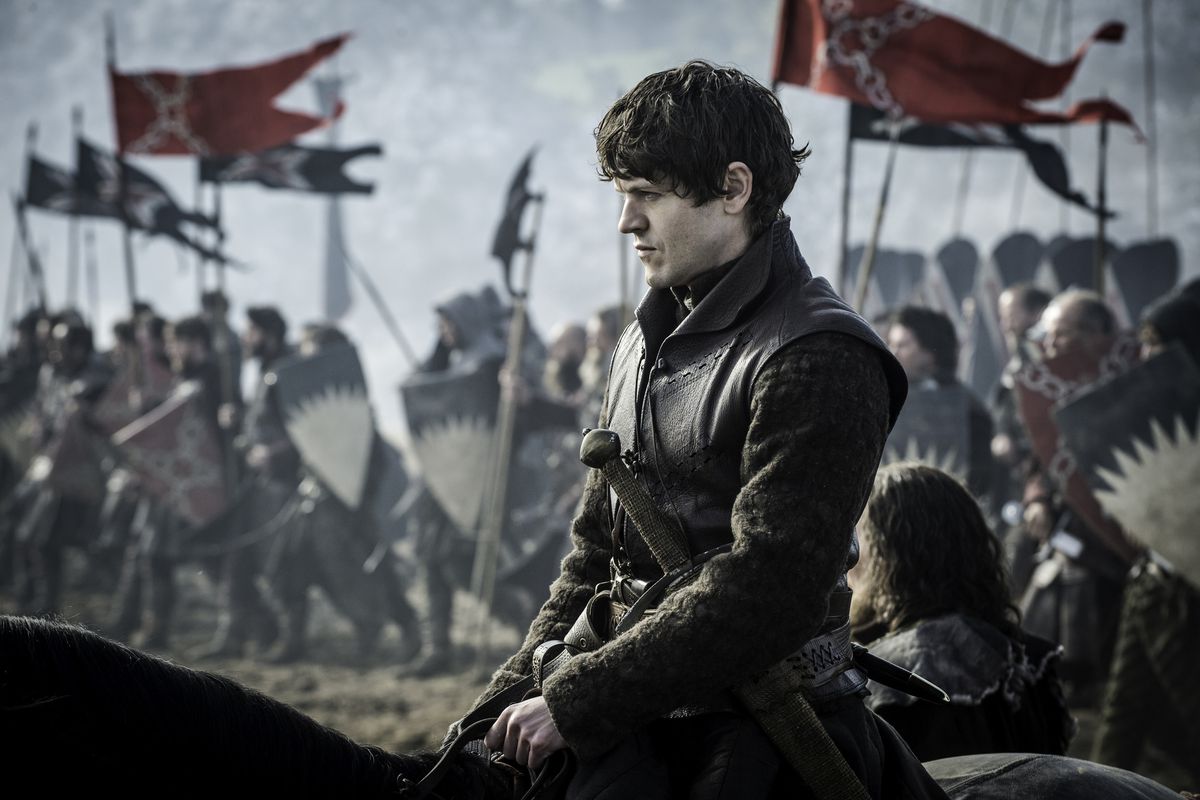 So with Ramsay’s entrance, he is revealed very slowly; it starts with one grounded and one waist level tracking shot. The first happens at the horse’s legs, then moves up to a low-angle waist shot from behind Ramsey as he grips and pulls a rope. With whatever on the other end, hidden off-screen. By the third tracking shot and cut, Ramsay is revealed calm, confident, and collected as he enters through his army of men. Directing his entrance this way helped to build the anticipation of Rickon’s fate for the viewer and Jon.

As follows, an inching low-angle tracking shot finally shows Ramsay stepping off his horse (camera tilts up his body) with a quick angled cut to discover Rickon at the end of the rope. Now for these last few frames discussed, a majority of them are medium shots with some taken at a low-angle. The director’s choice of mostly medium shots allowed him to emphasize both the actor and their surroundings by giving them an equal presence on screen. The medium shot also clearly shows the actor’s face and emotions while still informing the audience of what is going on in the world around them. In this case, we were able to see not only Ramsay, but also the details of his flag, his army, and the gritty, desolate battlefield.

The same directional approach happens once Jon is back in the frame. We now see him in a medium shot with his army in the background, all watching Ramsey pull Rickon further into the field. As this happens, Jon is revealed worried and wide-eyed. Thus, what gets Jon off his horse is the close-up of Ramsay’s knife used to taunt him, and, cut Rickon’s rope. Cutting back to Jon, the camera is stationary as Jon walks hastily in blurred and into lens focus to a medium close-up.

Jon is now tenser and appears not only paralyzed but horrified by what is now before him. His heart drops, and we feel it too. Once the true threat comes, Ramsay and Jon’s personality and idiosyncrasies are now displayed clearer. On that account, Bolton’s first words are to Rickon and the first illustration of his nature; “Do you like games, little man? Let’s play a game. Run to your brother. The sooner you make it to him, the sooner you get to see him. That’s it! That’s the game. Easy. Ready? Go. No, you have to run, remember? Those are the rules.” 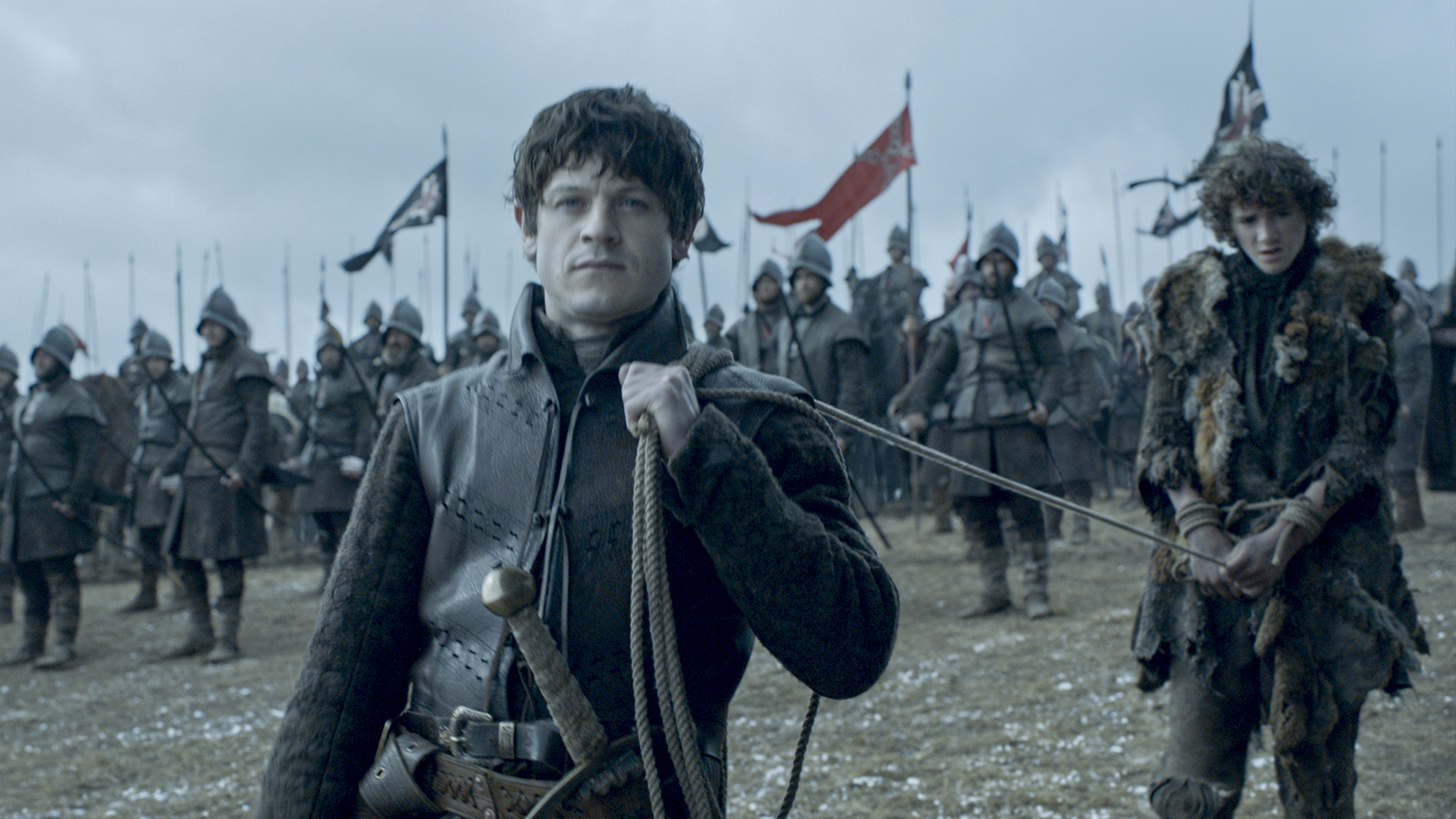 The blend of Ramsay’s behavior, tone of his dialogue, and the framing, all come together to embody his character and disposition. His movements are mischievous and animated with a wicked smile to match. And he appears to gain vigor from others torment and pain. So one of the shots used to suggest this is the medium close-up, used to capture the actor’s expression amid their environment. Then, additionally, the low-angle medium shot of Ramsay instructing Rickon to run shows him looking victorious and in control. It communicates a sense of inferiority for the viewer and everyone outside the frame.

The same is exemplified through the size of Ramsay’s massive army compared to Jon’s much smaller army as well. Hence, the next few frames feature Ramsay revealing his plan to hunt Rickon—his trademark tactic to killing—with arrows. Immediately it taunts Jon enough to make him abandon his army to save Rickon. Seeing him risk everything for the family is what makes him Jon, and a true Stark. However, it also shows he is more emotional than he is tactful, allowing the calculated Ramsay to gain the upper hand.

So with these last few frames, we get heavy intercutting (between Jon, Ramsay, and Rickon) and a blending of tracking shots, medium shots, aerial, low-angle, and medium low-angle shots. The medium shots show Ramsay drawing his arrow in his typical animated manner, and with a smirk or a smile. In these scenes, Iwan Rheon’s acting is effective at evoking Ramsay’s personality, for he is most sure of himself when he can be cerebral with attacks. It is not enough to hurt them physically; he must feel and see his efforts have assaulted the mind. As a result, Ramsey plays the game for Rickon’s life slowly and with gratification.

Missing several times intentionally, Sapochnik directs Ramsay in this way, as he knows the psychology behind the character. He knows Ramsay craves the high of the hunt. Additionally, during this scene, Sapochnik is playing with the way the viewer’s mind perceives patterns, by creating an astute perception of the order the four arrows follow and ending with the surprise kill shot. The set-up further plays on Ramsay’s psychology that shows his tactics are a part of his emotional state as well, which is a calculating and savage mindset.

The Aftermath & The Beginning

Suspense ensues as we get cuts of Ramsay shooting arrows, tracking shots of both Rickon, then, Jon rushing to one another, and aerial shots of the entire battlefield. Therefore, one of the best shots that unfold during this sequence is the tracking that happens backward and forwards while following Rickon.

The music is not overpowering (it rises then falls strategically), and we can hear his rapid movements and breathing. Captured impeccably are the sounds; the footsteps, the arrows passing by, and the arrow penetrating through his body are all pronounced, making the scene that much more invigorating to watch. The scene brilliantly edited, echoes a mighty blow that stunned and ripped away from the viewer’s expectations. Sapochnik showed us the ultimate consequence of war—death—and that it is a sudden and violent removal of life from a body. 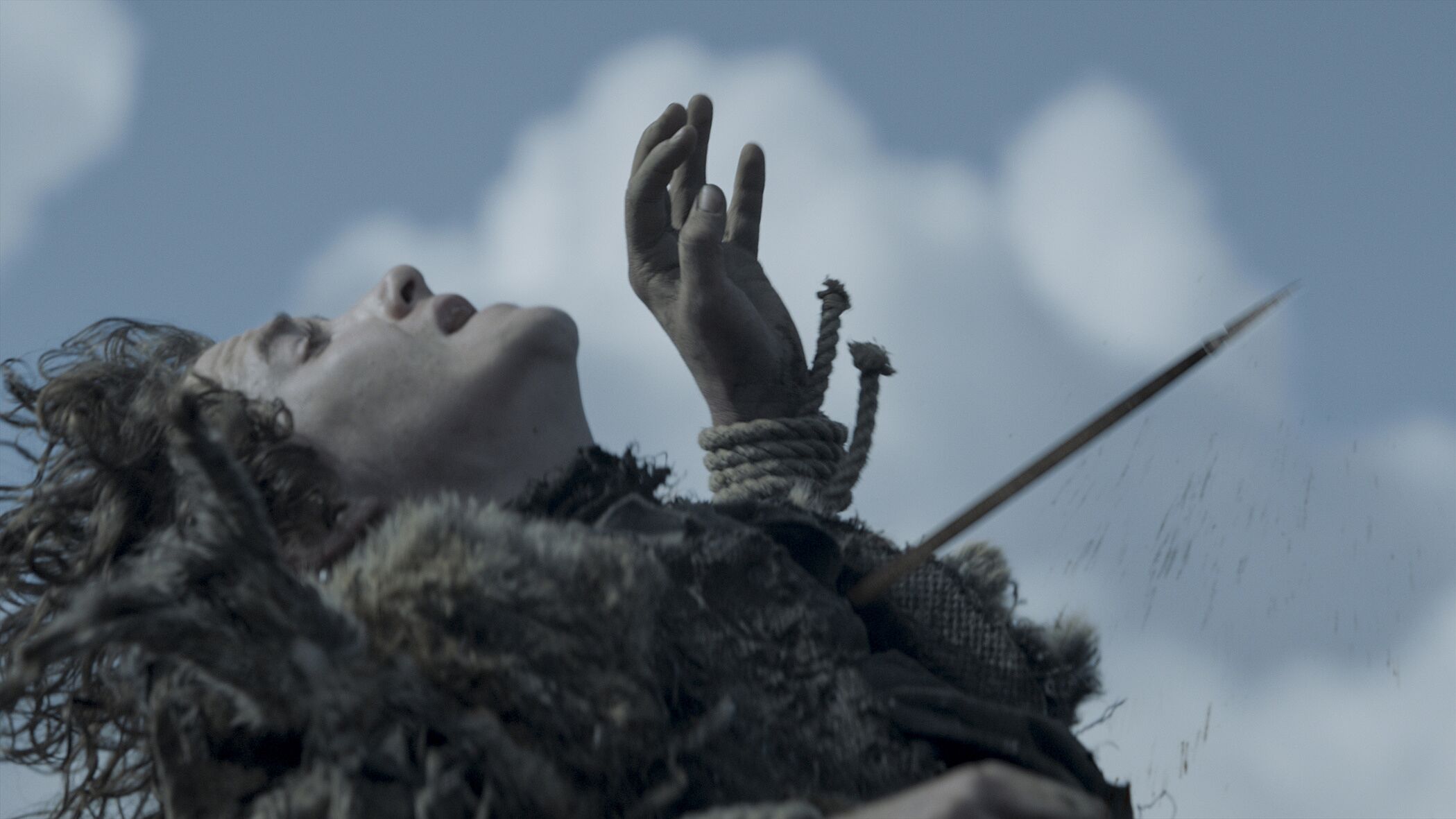 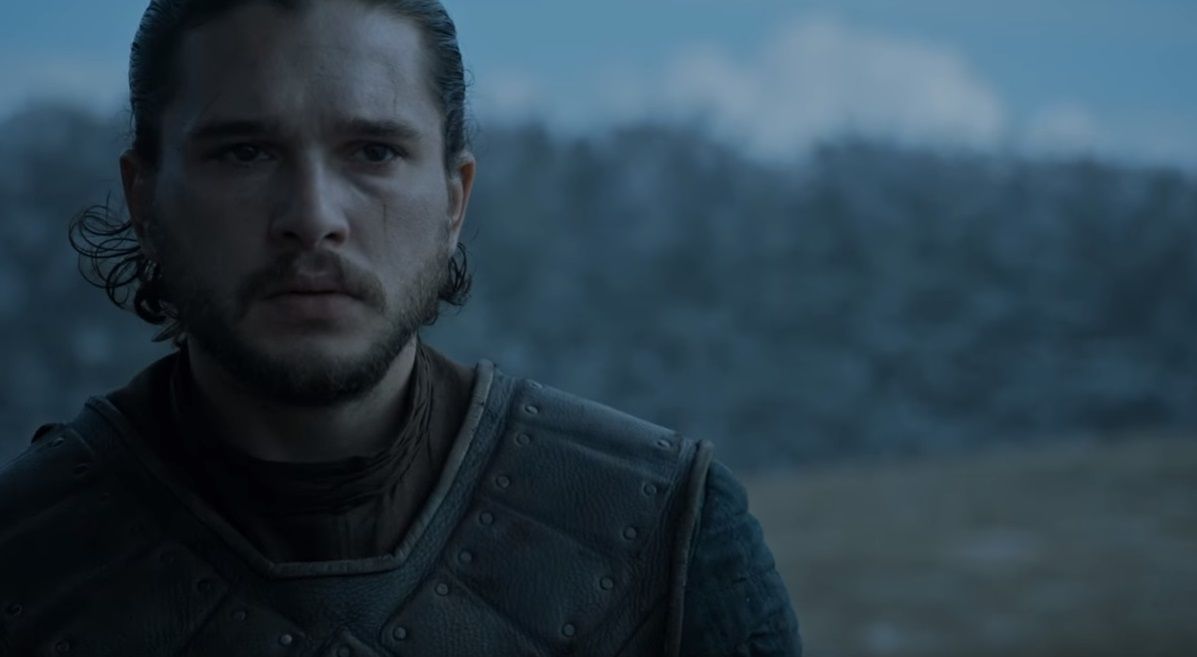 Lastly, from the events that unfold, starting with the two army’s arrivals up until Rickon’s death, Miguel Sapochnik’s directional choices suggest how he interprets war and its consequences. All the emotions of hope, fear, anger, and luck (discussed more in Part II) are represented through Jon, while expressed through Ramsay is the unpredictability and ruthlessness of war.

With that Sapochnik keeps us on edge until the climactic death of Rickon, to the effect of staging his take on war through both rival characters and the contrasting of them. Part II will start with the events after Rickon’s death up until The Vale’s arrival. It will expand more on Sapochnik’s vision of this epic battle and how and why it is exceptional storytelling.

What ABC’s ‘Once Upon a Time’ Gets Right About Fantasy

Greatness Of ‘The Mummy’ Within The Action Genre

How To Maintain Continuity In Film & Avoid Plot Holes

Game of Thrones “The Spoils of War”: Defining Character Through Battle

Pinocchio’s Design: The Portrayal Of Nature As Beautiful But Corrosive

The 7 Disney Eras of Animation and Their Significance

The ATU Folklore Index: A Resource For Traditional Story Structure