How 'The Dark Knight' Improves The Modern Action Genre

The Dark Knight successfully crafted action sequences evoking energy, fluidity, and purpose—something many modern action movies lack. Recent action flicks often are plagued with ineffective scenes of conflict that end up boring, appearing superfluous, and the worse, incoherent. However, with The Dark Knight action is handled much differently and thus, effectively. The way Christopher Nolan writes action scenes suggest he cares a great deal about the psychology behind conflict and not just the action alone.

He wants to not only wow the audience with violence and dominance of one enemy to another, but he wants it to develop the characters further. Alternatively, expose who they are when their backs are against the wall—exemplifying action with a purpose. Therefore, a great example happens when Harvey Dent (Aaron Eckhart) is handcuffed in the back of a swat car and attacked by Joker (Heath Ledger) and his goons.

Strategic Use of Sound and Color in Film

Setting this action sequence apart from the familiar is the look of the film and the strategic use of sound. Already established from the beginning, The Dark Knight’s aesthetic is incredibly striking and noticeably in a league of its own. Nolan opted for more natural tones as opposed to the blue and orange grades dominated in mainstream films. In this scene, instantly, the tone arouses curiosity—based on Nolan’s directional approach to Harvey’s detention. So unlike the conventional action movie, a shot like this would be enhanced with loud music (often a catchy pop song) to compel suspense or force the audience to feel alert. Most of the time, it comes off as bland or merely lazy storytelling. 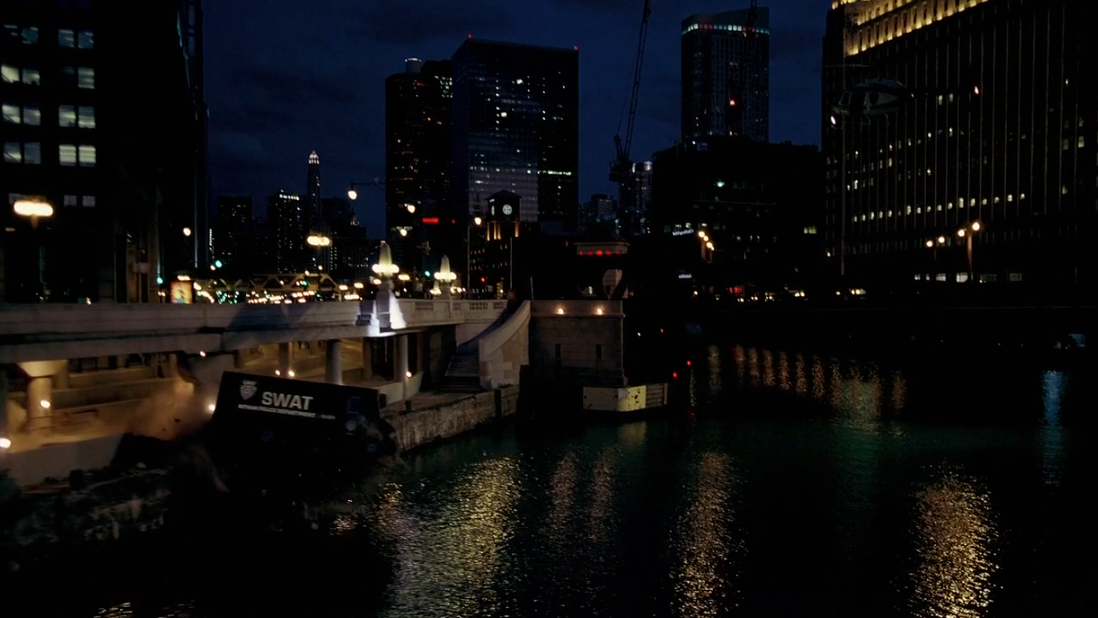 Instead, Nolan inspires our attention by opening with an aerial shot of the swat trucks passing through Gotham’s buildings and streets with helicopters following near and no music. Accordingly, the sounds of the trucks and helicopters are well-defined, creating a sense of stillness in all the madness. Leaving room for the viewer to focus on the details and naturally guide themselves through the scene and make sense of it. As though the camera is telling us, pause, reflect on the film thus far–see what has become of the characters. Harvey, the film’s symbol of good, is handcuffed in the back of a swat car, and Joker, the bad, is attacking the swat car—while Batman (Christian Bale) is in between the good and the bad tackling it all.

Likewise, suggested is this analysis because of how the sounds of the environment fade into a solemn score composed by Hans Zimmer and James Newton Howard. By doing so, it signals the danger underway for Harvey without dialogue, brazen music, and excessive effects. Alternatively, Nolen shows Harvey’s swat car riding past a fire truck on fire—alerting us that conflict is near. Therefore, from here on, the sequence plays out like a theme park ride as Joker and his men take out police officers one by one with surprises along the way. Engines running and automobiles clashing and crashing, dominate the sounds with no music once again, and short dialogue. Noted: the sound editing and color grading are phenomenal, making these scenes more vibrant and arresting. 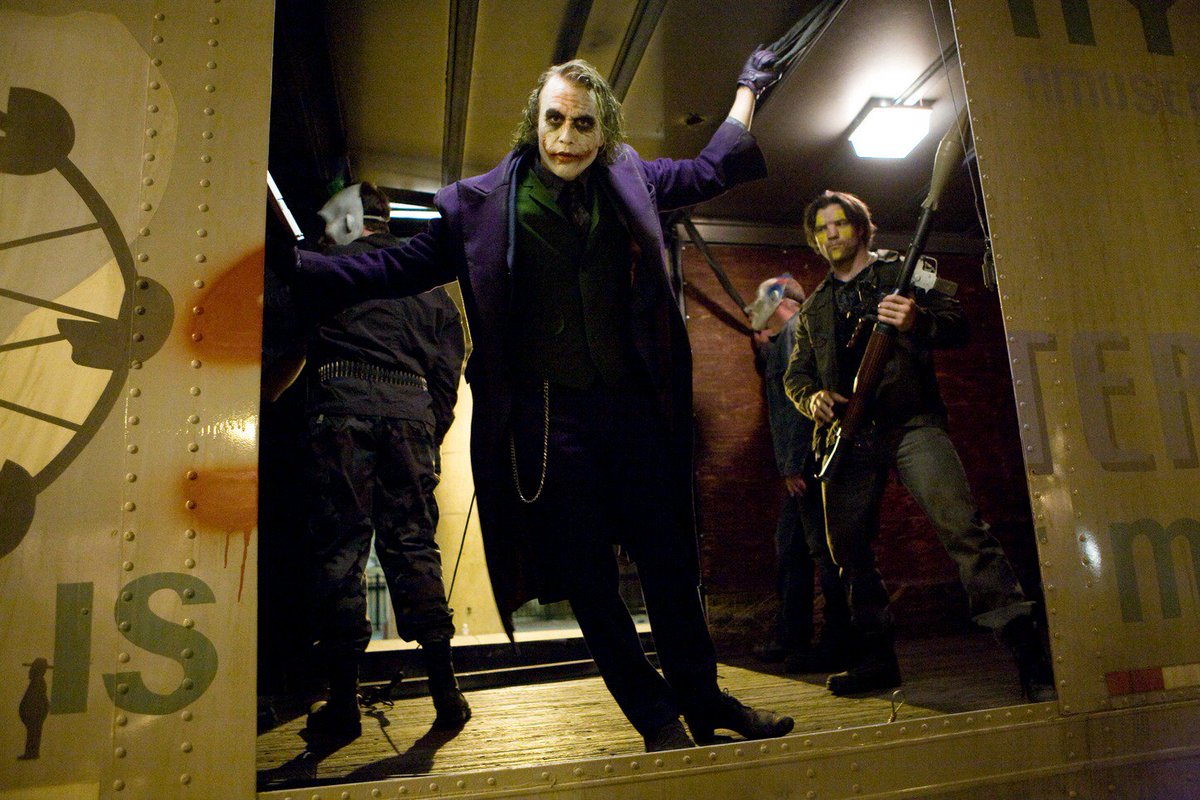 Nolan, directing the scene this way and omitting music—only letting the natural sounds play out, making it a more realistic, fluid, and immersive experience in the end. Also, he made us work for the reward. That reward being, catching Jokers semi-truck vandalized from ‘Laughter’ to ‘Slaughter’ to introduce him into the scene. Rather when he silently and casually switches from various guns, each not getting the job done, to finally settle on a bazooka. These elements not only create amusement; it gives layers to and establishes Joker’s character further even through the chaos he created. It is how he behaves that sets him apart from other villains and what garners fascination with his persona, not that he robs and kills. 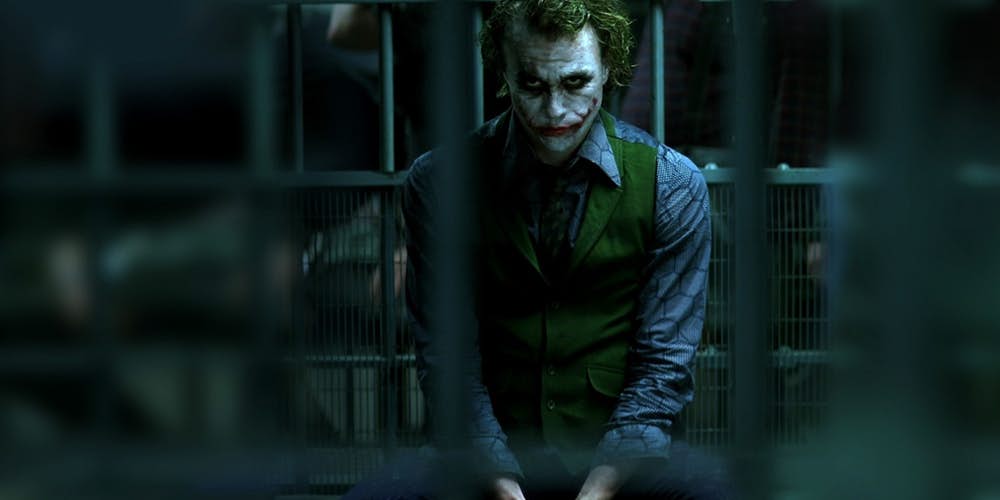 Ultimately, several instances are declaring this observation of how Joker’s personality is displayed throughout this sequence, advocating the effectiveness of showing and not telling. Batman, on the other hand, is much more straightforward as the anti-hero that saves Harvey and rejects Jokers yearnings to commit murder. His statement of character happens when he swerves into the street (injuring himself) not to kill the vary man terrorizing his city.

Thus, Batman lives by a code that he relentlessly protects and believes. And that is why this scene works so well and is what modern action films should strive to achieve more in their distinctive way. More specifically, a show and do not tell approach with more focus and appreciation for how details, collectively, can expand and bring additional depth to a story — even one riddled with action.