Rickon (Art Parkinson) is dead, Jon (Kit Harington) charges heedlessly alone, and Ramsay (Iwan Rheon) prepares to play his final game. But, just before this moment, Jon is captured numbed with devastation on his face while simultaneously staring with introspection. He appears to have become still within as well as on the outside. Hence, failing his brother, the essence of Jon is presented once more to the viewer as he watches Rickon take his last breath. To this effect, presented is his brooding rage—serving as our catharsis for what has transpired for innocent Rickon. We get to witness Jon profoundly transform from hopeful to destroyed, then menacing. His evolving emotions are what the strategist Ramsay wanted; an unhinged and irrational Jon is more likely to make a mistake. Therefore, these reactions and motivations are heavily suggested by the music, editing, and acting played out by Sapochnik’s vision. 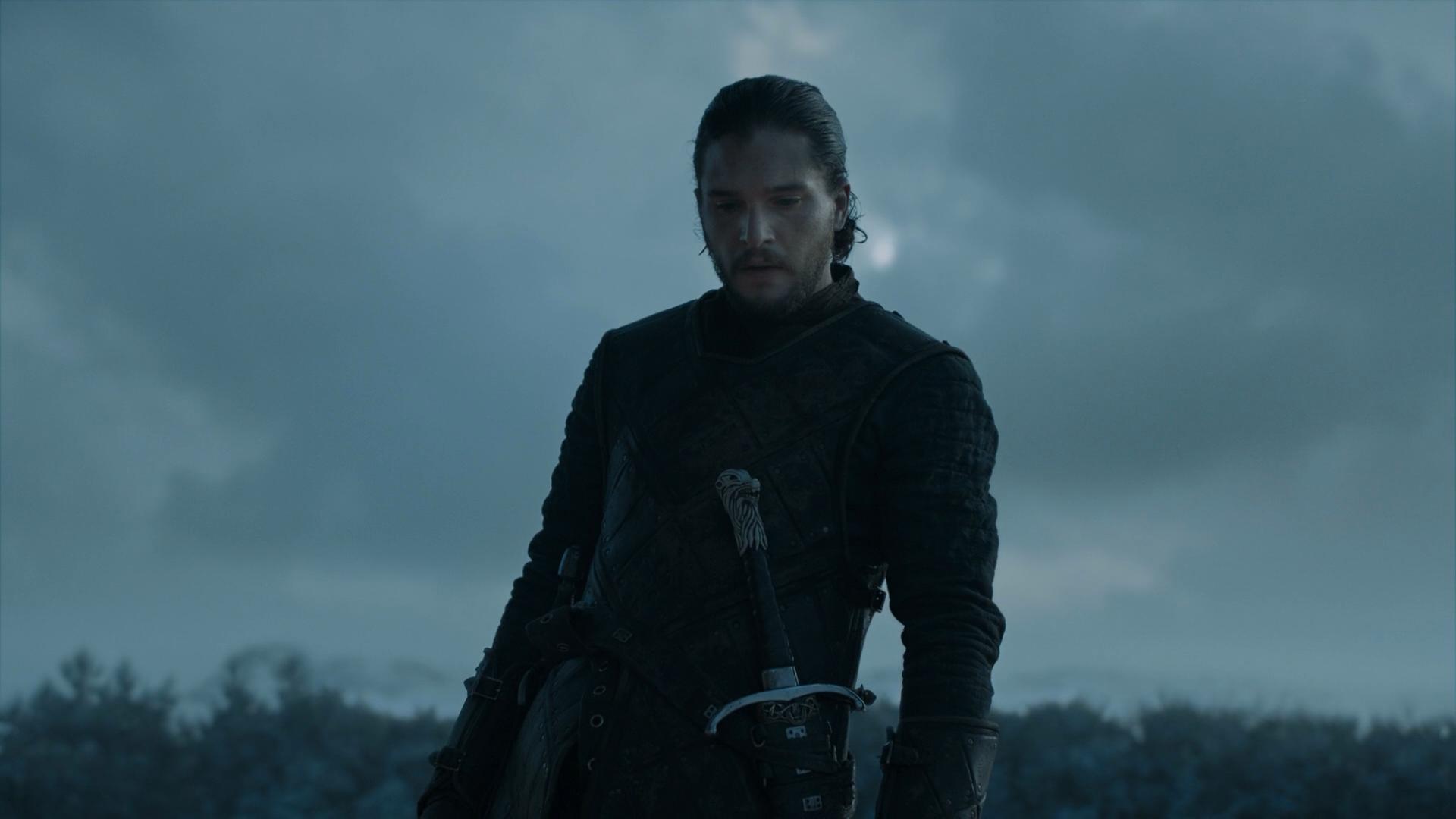 The beats of the music become more layered, adding to its quick tone with intercutting edits of Jon, Ramsay, Tormund (Kristofer Hivju), and Davos (Liam Cunningham). The cuts of Jon and Ramsay serve to be the reaction shots to Rickon’s death. Thus, Jon is unraveling emotionally in this scene while Ramsay is revealed smug, and checking for this undoing—then smiling with gratification once it is confirmed. Tormund and Davos, on the other hand, are responding worried that Jon will act on his emotions and charge foolishly. The intercutting during this sequence, bring these characters together, placing them within different areas of the battlefield, creating a composite scene. Likewise, we get a fluid progression of them all focused on Jon and multiple responses. Responses that heighten the tension of the scene and communicate with little to no dialogue the intentions of each character and an indication of how the next scene will play out. Overall, we get another example of Jon and Ramsay’s idiosyncrasies by observing how they handle Rickon’s death. Jon charges alone unwisely, and Ramsay prepares to unleash his ruthless brilliance.

To that end, the next scene shows the consequence of Jon’s actions, which leave him shot down from his horse by arrows with no cavalry. What comes after is an epic shot of Jon from behind, taking the center of the screen and 40 real horses charging full speed at him. Then, abruptly the camera cuts to a mystifying shot. It involves the camera giving the effect of slowly rotating around Jon and into a focused point-of-view, as he watches the army charging. The way it was achieved, it appears—part of the army furthest from Jon is blurred and is a green screen of soldiers added after filming. So Jon was filmed in the field with real horses charging at him at full speed, but with much fewer extras. The creators David Benioff and D.B. Weiss confirmed that there were 500 extras and 70 horses used, yet, Ramsey speaks of having 6,000 men. Hence, this is an example of the many effects utilized throughout the battle. In which this one specifically ended up adding to the grandiose of it all while making it look authentic. Too, during this scene, we get another poignant moment from Kit Harington.

The music becomes melancholy, and Jon is now looking down with a slight nod and heavy sigh, accepting his fate. In which he decides to draw his sword and face the army. Accordingly, why this scene is so powerful and intense is how Kit’s directed and the composition. Having Jon release and drop his leather sword belt and wield Longclaw—the Valyrian steel sword—to get in position to fight was a defining moment for the character. And watching the horses and men come for Jon with everything they have is a rush, indeed. Hence, it reinforces Jon’s honor and appeal as a character within the Game of Thrones universe. He may have acted unwisely, but even amid death, he rises and fights till the end. He remains to emanate strength and veracity even in his last moments, rare traits found in the fantasy series. Only a few roles within the show have intentions as pure as Jon, and surely do not live as long.

Even so, for a character made to feel inadequate, he still became better than the highest in all ways that truly matter, in which we see during his run-in with death. The scene also aroused the remembrance of his conversion with Melisandre (Carice van Houten), demanding he not be brought back to life if he dies. Further, indicating his acceptance of his death during this sequence. Fittingly we are left with the realization that Jon may die this time, to have it all ripped away seconds later once his cavalry reaches just in time to save their commander.

Subsequently, mayhem fills the screen, and both armies finally clash to battle it out for Winterfell. Upon that, here is where the brilliance of the editor is showcased and is most crucial to bringing the war to life. Where we see a great example is a bit in the very beginning where the show cuts immediately from the serene view of Jon to a frenzied scene of uproar. The two armies crash into each other with bodies and horses flying everywhere, perfectly setting the tone of the battle. Thus following the initiation of the battle, there are a few critical scenes through editing, its direction, and the performances that support the demonstration of Sapochnik’s take on war. As well as, the contrast between Jon and Ramsay that, further develops their characterization.

And so, the first example is the long single shot of Jon. It plays as if he is maneuvering through a busy intersection of passing cars—making luck the driving force instead of playing out hero archetypes. Accordingly, shot as if the viewer never leaves Jon’s side, we watch him be buffeted by horses, grazed by arrows, and attacked by men while contributing as best he could in the chaos. As a result, it further expands on the theme of luck relative to war; Jon’s superior swordsmanship and skills as a fighter cannot save him. Only a miracle or sheer luck can. And while this is all taking place, Ramsay is busy creating a significant portion of the chaos for Jon.

However, as Jon’s men die, so are Ramsay’s; he has decided his men are expendable and orders his archers to shoot on the melee. By him killing his men along with Jon’s, Ramsay is displaying the unpredictability and ruthlessness of war, yelling “Nock” (the nock is a notch on the rearmost end of the arrow that allows the archers to hit unpredictably but with force) several times with confidence and unflinching focus. Davos appearing shocked by Lord Bolton’s strategy; it compels him to tell his men to stand down. As a result, without even moving his horse, the mastermind Lord Bolton wipes out Jon’s cavalry in the first few minutes of battle. Because Ramsay may be a worthy contender, but in the realm of wits which Ramsay thrives on, Jon is outmatched.

Ergo, Ramsay stands on the sidelines with most of his army still intact as he orders them to release volley after volley of arrows, and effectively destroying the strongest part of the Wall army, without even breaking a sweat. It is also important to note the talented Ramin Djawadi scores the show; his work helped to convey the many emotions that were going through the mind of the characters and set the mood with an impeccable sense of apprehension and climax. A great example is how Djawadi combined Jon Snow’s theme (My Watch Has Ended) and the House Bolton theme effectively as when Ramsay’s forces form a phalanx around the Stark forces. We get to not only see these two clashing but feel it through the music as well. Furthermore, Ramsay’s tactics and structure of the battle that follows were, as stated by the writers, inspired by the realities of historical battles. Specifically, battles in the Civil War where there were accounts of the bodies piled so thick, it became an obstruction on the field. Therefore, Ramsay’s strategies followed manipulating piles of dead bodies in the center of the melee. In particular, this was reminiscent of Agincourt, the 1415 battle during the Hundred Years War. The war involved Henry V when he defeated the French with archers and longbows (roughly equal to the height of the user, allowing for a long draw). The French did what Jon’s cavalry did by eagerly riding into the vanguard only to be annihilated by Bolton’s arrows. Plus, both armies in the ruble are crushed by vestiges of horseflesh to add to the growing mountain of death and suffering. Then Ramsay deliberately waits to deploy his infantry until after his mountain is “built.” Ramsay then orders his commander Smalljon Umber to lead the infantry out around the mountain and bypass the Wall army, enclosing it on three sides in a U-shape. Ruthlessness comes again once the men are trapped as Ramsay planned, and are prodded at and killed one by one. We can tell Jon’s men had no idea how they got there until it was too late, while Ramsay made his own luck. He did not leave the war up to chance with a one on one combat with Jon; instead, he opted for creating ruthless unpredictability for his enemy, while strategizing everything from Rickon’s death to choosing his armies position on the battlefield.

Lastly, Ramsay chose the low ground, which is notoriously the least desired option. He does so to make sure Jon is at a certain point—the low ground, from when he kills Rickon. It can also be argued that Lord Bolton’s burning sigils were planted to not only intimidate the Wall army but to demarcate the terrain even more clearly. As we can see, Ramsay used intricate strategizing to outwit Jon in several ways, in which he had to be saved by Sansa (Sophie Turner) and The Vale ultimately. So, by taking a closer look at the characters Jon and Ramsay through Miguel Sapochnik’s direction, great storytelling became more evident, as well as its status as one of the best television war sequences to date.

Which other GOT episodes would you say are stand-outs in technical artistry like Battle of The Bastards?