American Horror Story 'Freak Show': Dandy Mott Is The Best & Worst of Us

American Horror Story’s Dandy Mott (Finn Wittrock) of Season 4’s Freak Show is not only the epitome of the worst-case scenario of an absentee parent, but he is a reflection of the evil that could be apart of our everyday lives. The type we never assume, the vilest kind. He is handsome, has copious wealth, comes from an influential family, and can have everything and anything he wants. Nevertheless, that is why his character is so haunting, troublesome, and relevant.

Why? Because Dandy is the best of us and the worst of us. In our objectivity superficial American culture, on the outside looking in, he has it all. His physical appearance is appealing, and he is extremely wealthy and successful. Consequently, society would subconsciously consider him the best of us—whether they want to admit it or not. Then agree that his penchant for killing innocent people is the worst of us.

Who is the freak?

We see this idea implied literally and figuratively in several of the episodes of American Horror Story: Freak Show. An excellent example is when a woman in episode 9 ‘Tupperware Party Massacre,’ answers the door when Dandy knocks and becomes noticeably relaxed once she sees him. She then happily allows him to come in—even though a stranger; her body language is trusting and open. Taken by his good-looks and being well-dressed, Dandy can gain access to murder all of the women.

Ergo, Dandy’s deceptive presence is what makes him so dangerous. He has money to bribe (when he has the cop kill Regina (Gabourey Sidibe), and he has access and the ability to move through the world unsuspectingly. Dandy teaches the audience a lesson and makes them ponder their prejudices that can have deadly consequences. 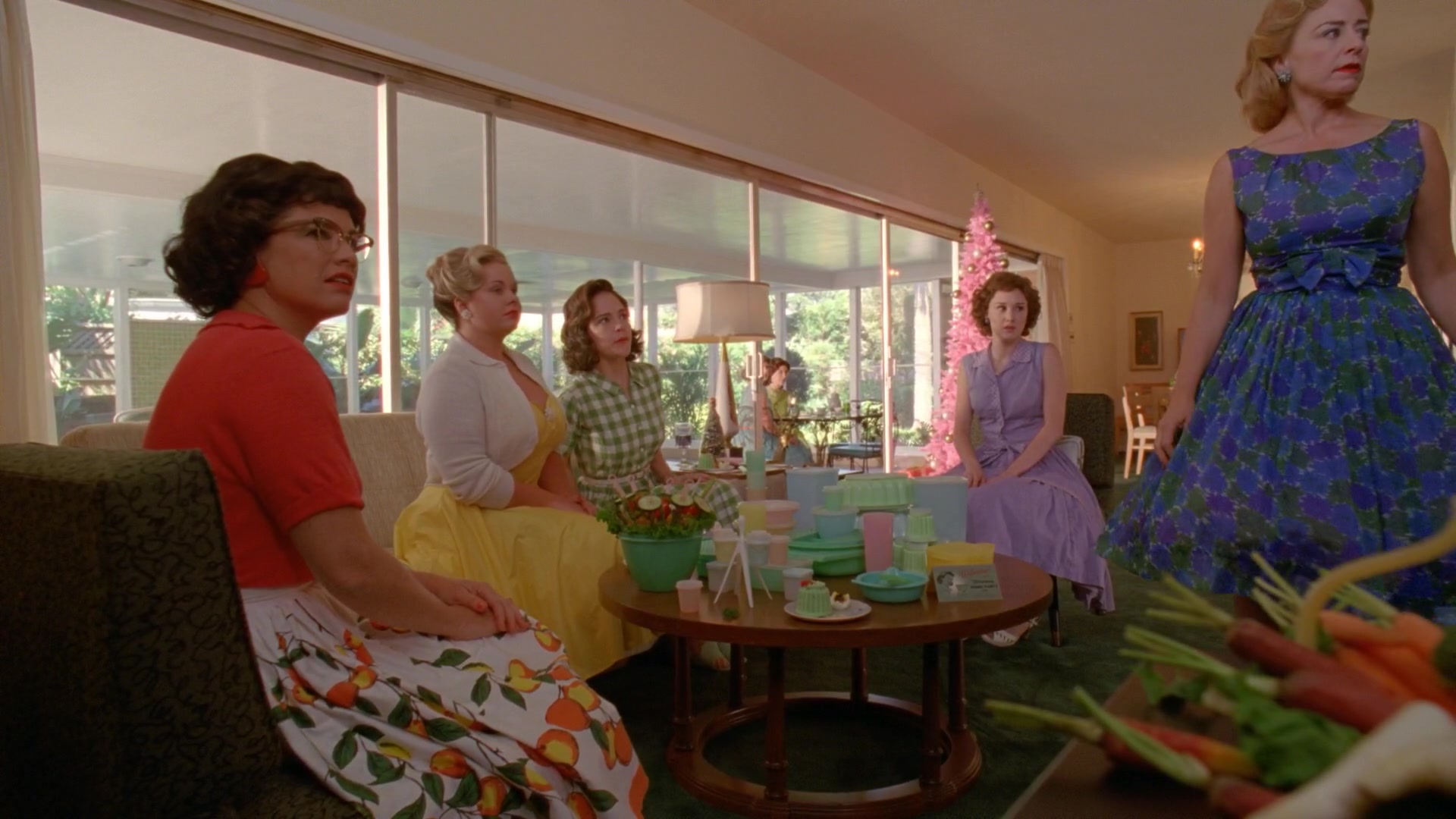 To that end, Ryan Murphy and Brad Falchuk created a character that seems to be a necessary mirroring of facets of today’s world. An entertaining—at times humorous, and disturbing necessity bathed in shallowness. As a result, Dandy forces us to question who is the freak and challenge the definition of it. The answer becomes increasingly evident with every killing Dandy commits.

Now, there are many reasons why Dandy could have become a sociopath serial killer; however, this analysis will center on a telling scene focused on what he ultimately became through a breakdown of his conversation with his childhood friend, Regina. This part was picked among the many other great scenes, because it depicts his descent into evil, acceptance, and embracing of it. Moreover, the wickedly stylish editing, the acting, and directing stands out as some of the best put forth throughout the season of Freak Show.

Scene Breakdown: “I am the law!”

The scene begins with Regina walking up the stairs of the Mott mansion, with a cut to Dandy in his room joyfully (humming) as he swirls containers of blood to poor into a bathtub to bathe. And to create more drama and starkness of the blood hitting the water, it is filmed with an overhead shot. To this effect, we get to see the blood flourish creating inkblot contours as it spreads. Once Regina enters Dandy’s room, the scene is now in a medium long-shot with a deep depth of field. Most of Dandy’s space is visible with this framing; it has Regina at the door and Dandy at the other end of the frame.

Therefore, the setup allows the audience to see clues of Dandy’s murderous deeds, such as the splattered blood on his mirror, toys, and the wall. It is an excellent addition to the scene since it makes us anticipate when Regina is going to notice and see how much Dandy does not care. For which Regina asks, “Is this my mother’s blood?” after Dandy tells her eagerly that he killed her mother.

Additionally, the dramatic music combined with Dandy’s typical pigeon-toed stance and cold demeanor towards Regina’s devastation creates an unbalanced, eccentric, and engaging atmosphere. He speaks with wide-tense, barely blinking eyes that appear deranged. Later into the conversation, we find that his eagerness comes from wanting to open up to Regina in his twisted way since she was the closest thing to a friend he ever had. Like when she tries to flee, and he beats her to the door, yelling, “Pay attention, Regina!”

Now locked in, Dandy confesses to Regina as if lifting a weight off his shoulders, how the gruesome acts made him feel. He says, “I cannot begin to tell you how it felt. The kind of control over their lives. Their trust, their fear, their pain, their confusion.” Ironically, every emotion he speaks passes through Regina’s face as she listens, terrified. Furthermore, he says, “I believe I am living my destiny. I’m finally happy. Regina.” She responds with, “Well, good for you. They’re not. My mother isn’t.”

Their exchange, filmed in a medium close-up, has different cuts of Dandy’s face visible and Regina’s gradually coming into the frame. To this effect, Dandy appears more dominant. Like how his arm is resting on the door to stop Regina from leaving and his face, deceptively happy. He feels more in control than ever before. Ending the conversation before walking to the bathtub with, “Take a bath with me, Regina. Like when we were little” and “You must have had a sense at least, that I was destined to be…this.” He proceeds to get nude so that Regina can join him, for which Dandy finally acknowledges her fear.

When he say’s “I am a god. A god who was chosen to walk among men. I have no interest in killing you. You were the only one in this house worth a damn. Stop acting so scared of me!” As he calls her ‘my special family,’ Regina finally flees after he slams his hands on the wall aggressively between her ears, saying he will get used to the loneliness. Then humorously yelling, “Go! Before I decide to kill you, too!”

However, although brief, the most significant and visually stylish part, is when Dandy is alone reciting to himself: “I’m above the law! Beyond the law! I am the law!” It starts when Dandy is in a medium shot that tracks him halfway into the room. Instead of the camera following in smoothly with no breaks, the scenes editing is of four jump cuts that gradually made available space within the frame, crafting a bracing alternative to continuity cuts.

The editing made the scene swifter and thus, frenzied, with the blunt cuts adding a charismatic effect to Dandy’s tirade. As we can see, this scene helped to show how far gone Dandy has become since the first episode. His god complex has grown just as much as his kill count, and he now embraces that he was never destined to find love. Instead, he finds it through the suffering and pain of others. As such, the handsome, wealthy, and young Dandy Mott shows us that anyone, even the best of us, can be the freak.

Do you agree with my interpretation of Dandy Mott and his particular significance within the Freak Show season?

The Strangest Places in ‘Game of Thrones’: Far East Westeros

Deconstructing Tim Burton’s ‘The Nightmare Before Christmas’: Behind the Production & Story Origins

Becoming The Don: Scene Study of Michael and Kay’s Final Moment in ‘The Godfather’ (1972)