The Lord of the Rings: A Closer Look into the Cinematography of 'The Fellowship of the Ring'

And so, the Fellowship’s cinematography can be described as audacious, picturesque, and whimsical with a compositional confidence thanks to Lesnie’s style and contribution. He managed to capture scenes that evoked intimacy and grandeur of Middle Earth, which is an essential element of balance for a story so vast and this human. To be able to film intimate moments and then pan out into the big picture shots of the world of Middle Earth is no small endeavor. The cinematography, as a result of The Fellowship of the Ring, beautifully captured the personal suffering among the characters and soldierly upsets with equal care. To this effect, the audience gets to enjoy being guided by the camera as it whips across the open plains, weathered hilltops, and lush forests of its land. However, there is a method to the brilliance, which we will see in these three shots discussed in the closer look.

“And nine, nine rings were gifted to the race of Men, who above all else desire power.” -Galadriel

The prologue of The Fellowship of the Ring is undoubtedly among the most compelling film openings. Galadriel (Cate Blanchett) speaks of the events that passed while foreshadowing what is to come, in one of the utmost remembered intros within the film canon. It comprises an ensemble of defining moments, like when we see the assembling of the nine kings gifted their rings. It is a composition dominated by the group of men in a neutral eye-level shot making a ‘v’ shape (functioning as a leading line)—with a deep depth of field. This depth of field creates layers in the composition as the king’s bodies descend further into the background. As a result, Lesnie crafted an image emanating a powerful presence. One that perfectly conveys the moment that would go on to shape the fortune of not only the race of men but all beings of Middle Earth with its dynamic framing and ominous subjects.

Another revealing detail is dramatic low-key lighting. It is indicative of its serious tone, mystery, and the character’s representation among the others. Unlike the elves, dwarves, and hobbits, the race of men has an unpredictable nature. Men throughout the trilogy have succumbed to evil, and have redeemed themselves more often than the others. Their complexity is written all over their vague expressions. They look nor happy or sad; instead, the men appear to be in a trance when given the rings. The framing is pleasing as well, as its impeccable symmetry and balance make the scene even more influential, such as adding an overwhelming feeling. Overall, it is a shot filled with a complexity that reflects one of the film’s most fundamental themes: power.

Hobbits hide from the Nazgûl

Then there is the striking scene where the hobbits hide from a Ringwraith in the hollow under a tree root. Instantly, the lushness of the earth tones is strongly present. The most eye-catching colors are the forest green, mineral-rich brown wood, and the moody blue sky. The hobbit’s clothing is immersed in several earthy tones too. As for the composition, it is in a medium long shot. We get to see the four hobbits fully, the trees, the sky, the horse, and part of the antagonist. This type of shot allows the frame to include several characters or visual elements simultaneously. As a result, we see the hobbits reacting with worry and fear, with their eyes directing us to the danger—the Ringwraith. Utilized are leading lines, too;  the massive roots of the tree create a separation between the Ringwraith and the hobbits. To this effect, it further expresses evil versus good.

Next, Lesnie used a deep depth of field that, just like the medium long shot, effectively conveys the tone of the scene and setting as it shows the protagonist, antagonist, and the supporting characters in focus. Additionally, this scene reinforces the premise of a journey. The much smaller hobbits are hiding in the suddenly menacing Woody End forest, while a large black horse and black-figure hoards over them. Often on a journey, the character(s) run into trouble and end up hiding at some point from the threat. This instance is a perfect example of that familiar happening. Therefore, the cinematography choices of this scene reinforce the film’s premise of a journey as well. It expresses uncertainty, strong forces, and feelings of powerlessness while influencing the audience to hope for the hero to get out alive. 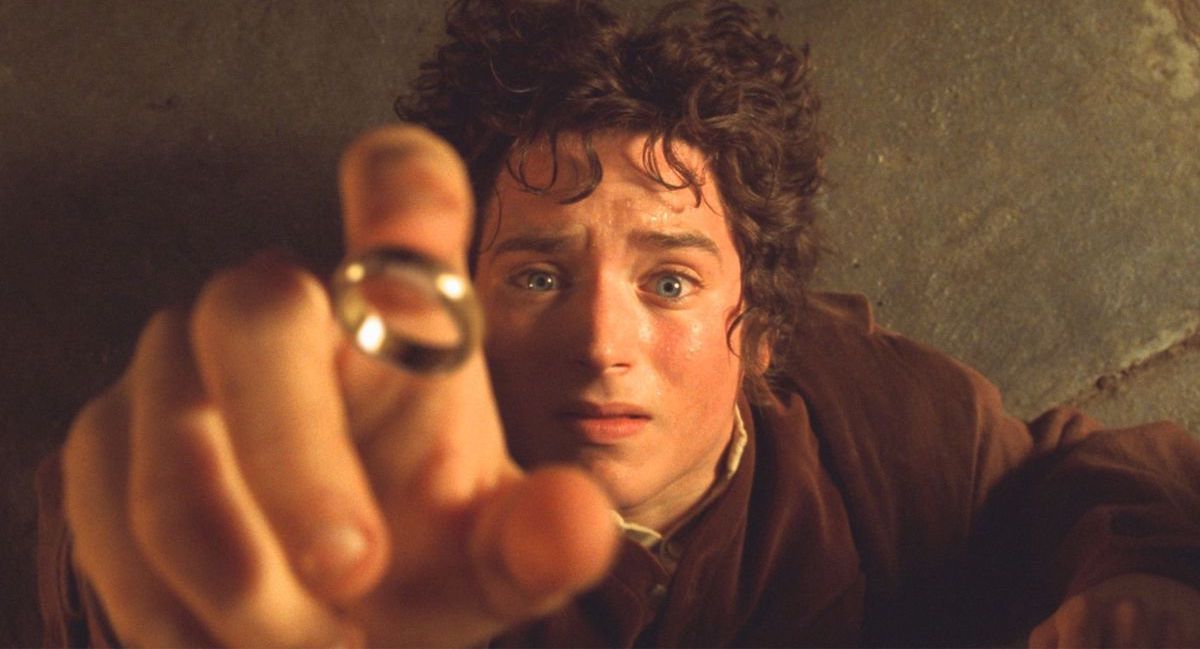 Nevertheless, what may be one of the more exciting shots in The Fellowship not tied to an action sequence, is when Frodo (Elijah Wood) puts the ring on for the very first time. We get an overhead shot of him at the Prancing Pony falling on his back and simultaneously reaching for the ring. While this is happening, the ring maneuvers unnaturally onto Frodo’s finger, only to transport him to a hollow void of the eye of Sauron and the black riders. It proceeds to cause him pain until he can resist the power of the ring and remove it. Hence, what is so great about this shot is that it is wonderfully cinematic. The drama, the intrigue, and the creativity are all there. Cinema is all about drawing the audience into the story, and this shot does just that.

Furthermore, overhead shots allow the moviegoer to be positioned in a godly-view of the character(s) and get in on the action. Another useful element to this moment is the soft high-key lighting. It makes the scene less distracting and more appealing to the eye, and we get to see not only Frodo but part of his surroundings, making the scene more tangible. Thus, typically, high-key lighting is used to convey a happy situation, but in this scene, it conveys the fact that Frodo cannot hide from the eye of Sauron. Sauron is even quoted saying once Frodo is in the void, “You cannot hide. I see you. There is no life in the void. Only death.” Nonetheless, ultimately, these three frames are just a mere snippet of the superior skill set demonstrated by Andrew Lesnie through The Fellowship of the Ring’s cinematography.

What are your favorite cinematic shots from The Fellowship?

Rated PG-13 For Epic Battle Sequences and Some Scary Images