Chilling Adventures of Sabrina is not only an enjoyable chronicle of the challenges of being a half-witch half-mortal teenage girl but also a stunning practice in costume and setting characterization. The colors, patterns, and choice of style come together to craft the perfect witchy tone and give us an absorbing expression of the supernatural, horror genre. To dive deeper into how the show achieves this, let’s take a look at the scenery and the chicest witch of the series: Sabrina. 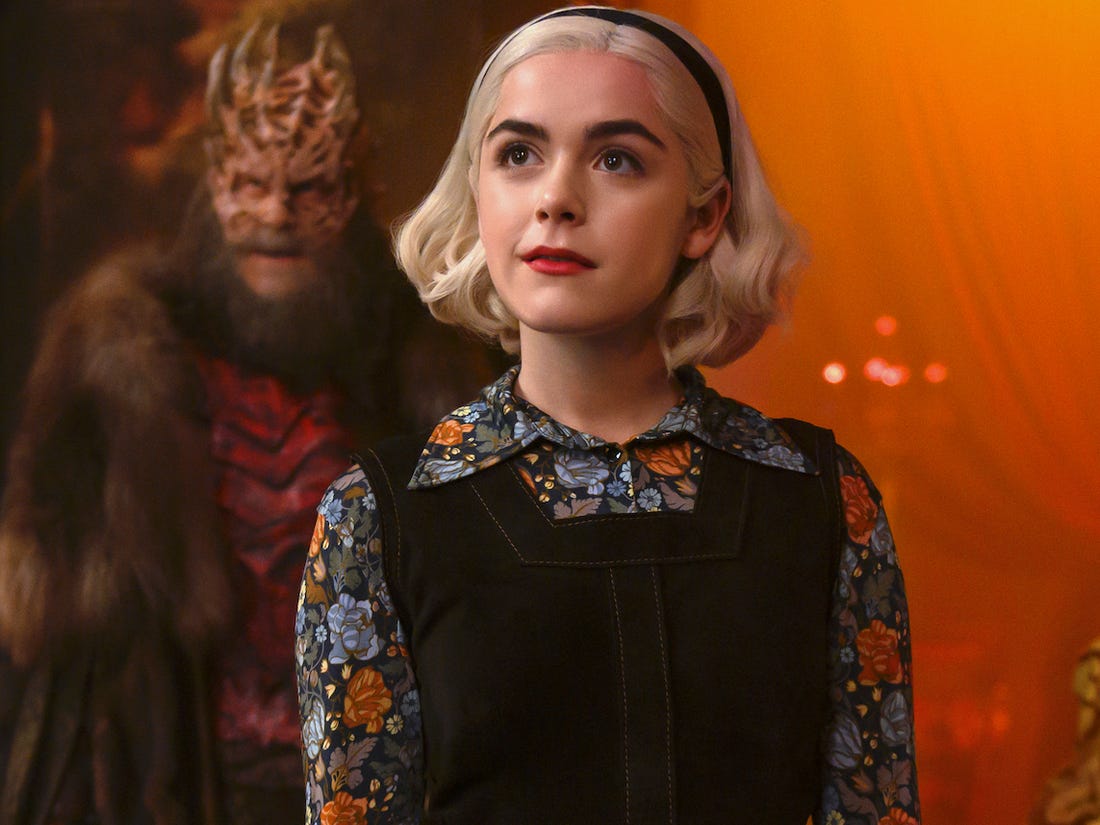 What is more archetypal to the backdrop of wicked and supernatural stories than Autumn? The season where the leaves begin to turn brown, the days are shorter, and a chill can be felt in the air. The creators of Sabrina take advantage of this inherently scary season’s look and finds enchanting ways to infuse it into the show. Most notably, through a way of color and style of the costumes that move together like Fall foliage with all the burgundies, browns, greens, and oranges imbued across all the character’s attire.

Though, Sabrina’s ensembles evoke most of the shows eternal Autumn and past eras out of anyone else. During the first season, her often monochromatic red looks (especially her covetable crimson red coat) were chosen to suggest a girl coming of age. As the show progressed, more sophisticated and chic her looks became. Every season incorporated and paid homage to the comics rendition of Sabrina’s ever-present thick black headband, which would later pin back her platinum blond tresses. Besides, whatever the season, her penchant for cute knit and tweed sweaters, loafers, turtlenecks, high-waisted skirts, dresses, and an array of outerwear remained constant, along with clothes fashioned in the Fall colors of orange, brown and gold. And dashes of blues, reds, and blacks when she felt most wicked.

Playing With The Past To Enrich Setting

On the other hand, the show’s penchant for toying with the idea of anachronistic time and space with clothing aided in evoking the shows decades past and odd scenery, making for a compelling element to portray the occult setting further. Chilling Adventures of Sabrina does occur in the present; the characters use cell phones and laptops. However, their nod to the late 60s/early 70s and timeless style, along with character tendencies, remain peculiar. Like how Sabrina is rarely, if ever, seen using a cell phone—she uses a landline or magic/astral projection to communicate with friends and family. The first episode features Sabrina and the gang watching old classics like The Night of The Living Dead and Carnival of Souls, and their music sounds like it came from an old jukebox. As when Sabrina turns on the radio and dances up the stairs to The Ronettes “Be My Baby.”

Subsequently, there is Zelda’s cigarette ring holder invented in 1934, designed to keep cigarette stains off your fingers, which she is shown using in almost every episode. Alternatively, the old-fashioned television shows Hilda watches from time to time, and the ominous old painting’s that cover the Spellman home. As we can see these archaic touches are gloriously sprinkled throughout the show to remind us of Greendale’s strange and off-beat aura. That underneath the surface of a small quiet town is inhabited by witches and warlocks, demons, and many more beasts waiting to wreak havoc.

What characters style do you like most in Chilling Adventures of Sabrina?