The Mummy (1999) An Adventure Movie Classic

The Mummy begins with an introduction into the alluring ancient world of Thebes, Egypt—the city of the living and the crown jewel of Pharaoh Seti I. These scenes immerse us with an elaborate setting of Egyptian architecture, royal attire, and the Goldfinger paint job. Most notoriously on Anck-su-namun (Patricia Velasquez). During this setting, shown is the pharaoh Seti, his high priest Imhotep (Arnold Vosloo), and his mistress Anck-su-namun and what leads to their demise. And to the creation of the mummy. Millennia past. It is now the 1920s, where we meet a French foreign legionnaire named Rick (Brendan Fraser) and his cowardly friend Beni (Kevin J. O’Connor). Then, a librarian named Evelyn and her brother Jonathan on a naive quest to Hamunaptra, the City of the Dead.

Therefore, the series of events leading to Hamunaptra sets the tone and pace for the rest of the film. A pace that is also its strength. Like Rick and Beni bantering back and forth while they are about to be attacked and when they get attacked. Something that happens very often in the film. Thus, foreshadowing the cadence behind the humor to come. All the actors deliver their lines with an effortless flow that it never makes a scene feel dull or too chatty; they always hit their mark—not a second more or less.

Rick and Beni, in particular, are the standouts; although, Evelyn and Jonathan have their fair share of amusing lines. Rick delivers every word with a boyish charm and calm demeanor. One of the most humorous parts is when Beni’s bragging about having all the horses once the fire forces everyone off the boat. Rick says: “Hey Beni! Looks to me like you’re on the wrong side of the ri-ver.” There is nothing particularly poetic or moving about these words, but what makes them memorable is the delivery of the dialogue. How Rick repeats part of what Beni says only to further the blow can get most fans of the movie saying it along with him, and with delight.

An even more comical scene that perfectly depicts how the movie is excellent at making their audience feel the impending danger, yet, keeping it light is when Rick and his crew are driving away to escape Imhotep and his possessed followers. We see Beni yelling as a child would who is tattling on their older sibling, “Imhotep! Imhotep!” Doing so to alert the mummy of Rick’s crew and their attempt to escape. Rick responds with anger, “You’re gonna get yours, Beni! You hear me? You’re gonna get yours!” Beni replies with a snarky, “Oh, like I’ve never heard that before!”. This piece of dialogue also captures the essence of how much a weasel Beni is and how Rick always makes him pay. And, further creating their energetic and combative relationship.

The chemistry of the entire cast is favorable, as well. Rick and Evelyn are likable and strong leads in their unique ways. The role of Evelyn is refreshing because she is a fully-realized female character. She is an academic and has her separate motivations and purpose for adventuring into Hamunaptra, and not merely an accessory for the male lead to have something to gawk. Evelyn supersedes her aesthetics. The audience instead gets an entertainingly clumsy, yet intelligent resolute woman guided by her ambitions and not only romantic interest.

Rick, on the other hand, is the handsome, fun, hero thespian modeled in the vein of an Indiana Jones type. However, Fraser still creates a memorable character worthy of appreciation. He acts in a way in which he knows comparison to Harrison Ford’s beloved character is likely, so why not have some fun with it. Almost as if winking at the audience. He is also the backbone of what makes the movie enjoyable. Every scene Rick is in, there is some humor or glimpses of his charming smile found within every frame. He can lighten a part with his energy and relaxed demeanor. One scene in particular, and my favorite, he does this effortlessly when he saves Evelyn before the completion of the resurrection. Rick charges in with a sword and proceeds to kill 13 mummies memorably. 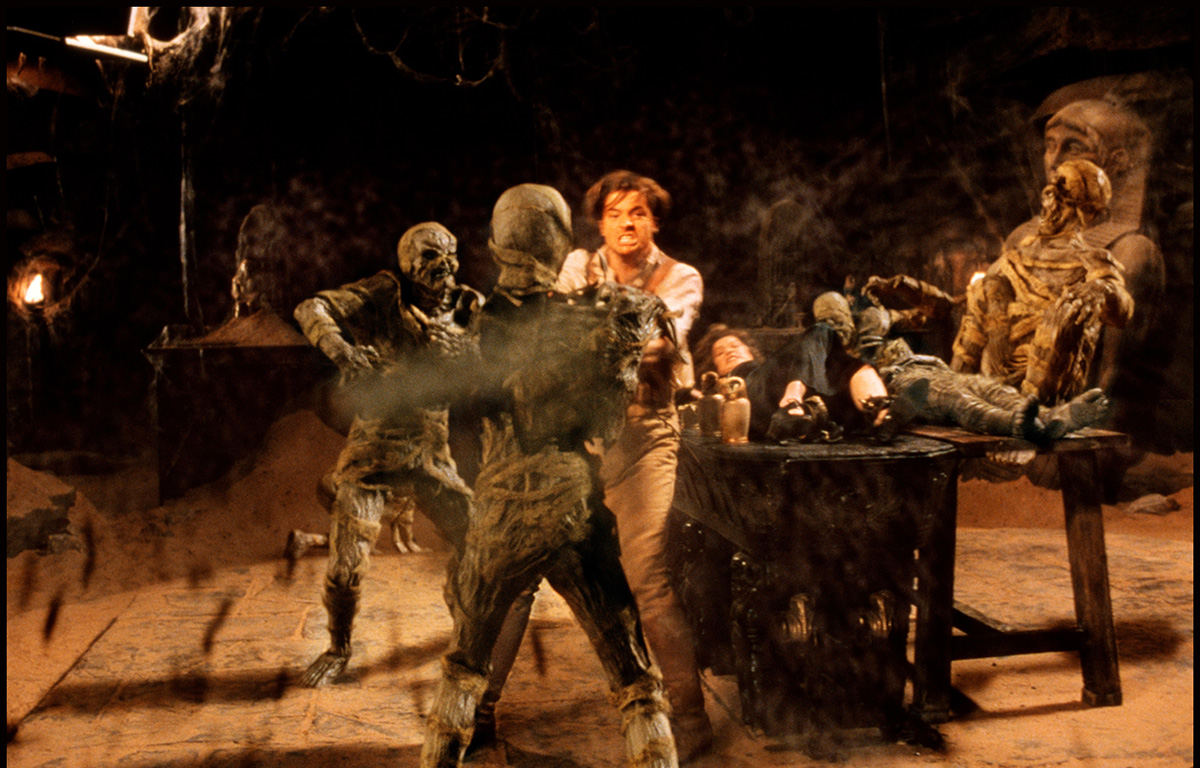 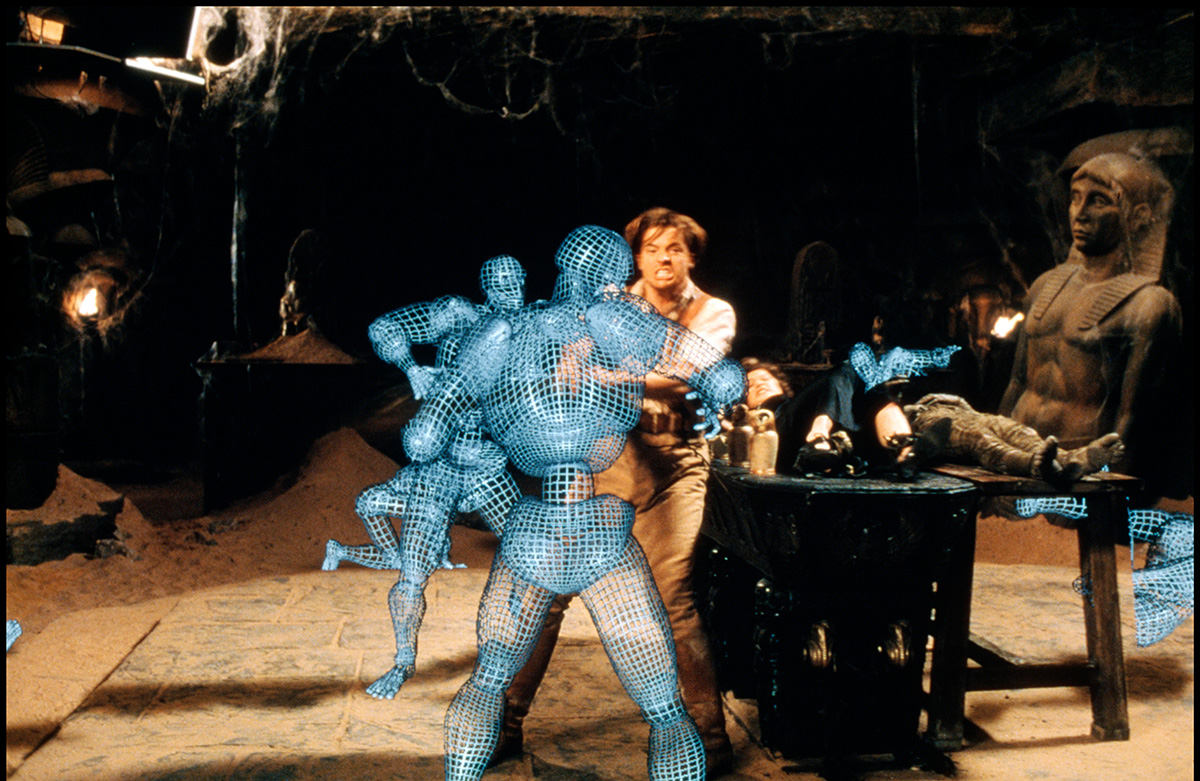 The shot is directed seamlessly with no cuts, which is more appealing since most action scenes can get too choppy or become disorienting. Thus, for this shot, Fraser has to replicate a series of complicated fight movements that were choreographed. Each action is specifically designed to match into a stunt man. Who will later be motion captured in a way that allows the editing and graphics team to substitute a computer-generated character in each place that matches in with all of Fraser’s action throughout the fight scene. So the special effects team achieved everything by mapping the motion capture of the stuntmen on to each of the skeletons that represent a mummy. It is done to make sure the mummies are precisely where they need to be to match into Fraser’s movements.

Then, the bodies of mummies added went on top of the skeletons, with combined dust elements coming out of them, to achieve a sense of realism as they are being chopped up and matched by each thrust of Fraser’s sword. This scene, by far, was a favorite then and is still today. So on top of the great cast and the movie’s fun atmosphere, The Mummy’s cinematography, direction, and setting are noteworthy as well. The story takes place in Egypt, yet The Mummy filmed in Marrakech, Morocco. The filming lasted for 17 weeks and included photography shots taken for the movie in the Sahara Desert. Outside the small oasis town of Erfoud and the United Kingdom. Thus, Adrian Biddle is the cinematographer who supplied The Mummy with its beautiful shots. His past cinematography work is in the films V for Vendetta (2005), Thelma & Louise (1991), and Aliens (1986).

Moreover, what is appealing about films shot in the desert, like Lawrence of Arabia (1962), is the clean and simplistic yet grand look to them. There are not many sets that take up space. Instead, it is usually the actor(s) and the vastness of desert land as their only companion. Seeing Rick and Evelyn embrace one another at the end with the wind blowing in their hair, and the backdrop of the desert is a magical setup. In like manner, the 1920’s setting and attire in The Mummy are pleasing as well. Rick is seen sporting a classic 1920’s adventurous outfit featured in many movies. He is a French legionary, so his key pieces are a white military shirt with little panels on the shoulders, khaki trousers, and brown boots.

Plus, an old-school western-style shoulder gun rig, bandana (for keeping mouth and nose clear during sandstorms), brown leather belt, and wristband too. Rick’s outfit shows us that he is ready for action and adventure at any time. Likewise, Evelyn is wearing the picture-perfect 1920s attire for women in multiple outfits throughout the movie, each reminiscent of the romantic years. She is often seen wearing long skirts, simple white tops paired with a silk chiffon scarf, summer hats, and oxford style middle-heel boots. The femininity of her outfits radiates sophistication and a simpler time adding to The Mummy’s charm.

However, what ties the characters, setting, and fight scenes together so well is the movie’s stirring score. Created by the composer Jerry Goldsmith, the music in “The Mummy” makes the film come to life. Goldsmith is known for lending his musical talents to films such as the classic Chinatown (1974), Planet of the Apes (1968), The Lost World: Jurassic Park (1997)—which brought him more popularity, and L.A. Confidential (1997). Hence, the music is ostentatious and provoking like most action/adventure movies, but what makes it stand out is how it mixes these foundations with the influence of Ancient Egypt and haunting features.

The middle eastern style of music is woven expertly into heroically portrayed horns and pounding drums and strings, making for an exciting adventure with Rick, Evelyn, and Jonathan. While never being hampered by a lot of added effects. From start to finish, the music does not feel out of place or distracting. It moves from intensity, romanticism, and dread seamlessly. Instead of turning into obnoxious filler music that can plague some action flicks, the score remains to be vigorous, comprehensive, and purposeful. Each song captures the film’s tropes brilliantly and never loses its momentum or ever feels out of place. So, with its fantastic cast, non-stop humor and charm, brilliant score, and engaging cinematography, The Mummy has become a true adventure classic.

What are your thoughts about the film? Any favorite parts?

WRITTEN AND DIRECTED BY

Rated PG-13 For Pervasive Adventure Violence and Some Partial Nudity